JUST WHAT THE WORLD NEEDS: ANOTHER PHONY MONSTER SHOW! BEASTS OF THE BAYOU

BEASTS OF THE BAYOU on the Discovery Channel

Pros: Monsters – with just a dash of science

Cons: If I say that this show is a ripoff of Mountain Monsters, what does that tell you?

It’s sad to say that the genre of the “monster hunt” television show may actually have hit its finest hour with the advent of shows like Monster Quest and Destination: Truth, both of which had a fairly lengthy run in the late 2000’s and early 2010s. Circa 2014, this genre of TV show which originated decades earlier with the comparatively sober In Search Of… has been overrun with an increasing number of programs which seem to possess not one iota of authenticity. Programming like Desination America’s Mountain Monsters pushes credibility to the breaking point, while History Channel’s Cryptid: The Swamp Beast flat out acknowledges that the whole show is one big dramatization. If we combine those two shows and add just a dash of actual science, we wind up with Discovery Channel’s newest creation Beasts of the Bayou. This show follows the adventures of 400-pound shrimp fisherman-turned halfass monster wrangler Timothy “Blimp” Cheramie (previously, the star of Discovery’s Ragin’ Cajuns reality series) who, along with first mate Eric Tiser and nephew Nathan Neal (“who spent the past few years living wild”), attempts to track down some of Louisiana’s most legendary (and most preposterous) monsters.

OK – so this here may be Blimp’s worst idea ever.

I first saw Blimp on the 2013 Shark Week special Voodoo Sharks, which culminated in a scene of the morbidly obese shrimp boat captain diving into the world’s most vulnerable, ineffective shark cage in an attempt to photograph mysterious sharks that had infested the Louisiana bayou. Apparently, the “success” of this program led to Blimp landing the Beasts of the Bayou gig, and the show first appeared during Discovery Channel’s 2014 “Monster Week” with a show dealing with the “Cajun Werewolf” also known as the “Rougarou.” This premiere episode saw Blimp and his crew replicating the basic formula already established by the overweight hillbillies featured in Mountain Monsters by (inexplicably) instantly locating a supposed monster and subsequently using a variety of traps pulled straight out of a Wile E. Coyote cartoon in an effort to capture said beast (say it with me: it’s a “woof“). As Blimp, Eric, and Nathan bumble around in the swamps making fools out of themselves however, Beasts of the Bayou one ups some of the competition by actually having a scientist appear in the program doing his own investigation into the appearance of so-called “coy wolves” – wolves that have cross bred with coyotes. In a brilliant PR move, the scientist conducting this research is none other than Idaho University professor of anatomy and anthropology Jeff Meldrum, who’s become widely known as being one of the few “academics” taking research into the existence of Sasquatch seriously. Forget the fact that Meldrum (a primate specialist) has about no reason to be doing this type of research about canines – the guy instantly adds infinitely more scientific credibility to Beasts of the Bayou than features regularly in shows like Mountain Monsters or even Finding Bigfoot.

“Yessir; these folks are some honest to goodness MONSTER HUNTERS.”

A few weeks after the “Cajun Werewolf” episode, Beasts of the Bayou finally found a home of its own on Discovery’s Thursday night programming lineup, debuting in this time slot with an episode focusing on the “Altie,” a sort of Loch Ness Monster marine creature reportedly prowling the southern United States. Blimp and the gang head into action again in (an increasingly absurd and utterly unbelievable) search for the (even more unbelievable and absurd) creature. Seriously, wait until you see the purported “video evidence” showing Altie appear behind a jet skier… talk about HOKEY. Meanwhile, a Tulane University scientist named Dr. Henry Bart conducts a search looking for alligator gar who have migrated deep into the Louisiana swamp. Apparently, extreme levels of pollution have caused this migration (and images of the jaw-dropping pollution level in the bayou are easily the most shocking thing about this episode), resulting in these strange, dangerous-appearing but relatively harmless large fish coming into contact with people more frequently. This “Loch Ness Swamp” episode features some positively ridiculous moments (including one confounding moment where an unknown animal almost drags Blimp’s rather large, ramshackle boat into the drink) and builds to a ludicrous finale that doesn’t so much as prove a thing. Yep – without doubt this is another somewhat compelling but ultimately asinine monster hunt show!

My biggest problem with Beasts of the Bayou is precisely the same one I had with the equally moronic Mountain Monsters: though these shows claim to be portraying real events, there is simply no way this is true. Cameras seem to be positioned in precisely the right position to capture events that we’re supposed to believe are occurring live, as we watch – but anyone familiar with television/film production (or with half a brain) would realize that unless the production crew knew what was going to happen beforehand (either by using pre-scripted directions or psychic powers of precognition), this would not be possible. In a nutshell: scenes here – particularly the more prominent ones involving Blimp, Eric, and Nathan’s (mis)adventures – look way too slick, polished, and stylized for me to have any confidence that they provide a record of actual events, and I’d ultimately have to declare that the majority of this program is absolutely phony. 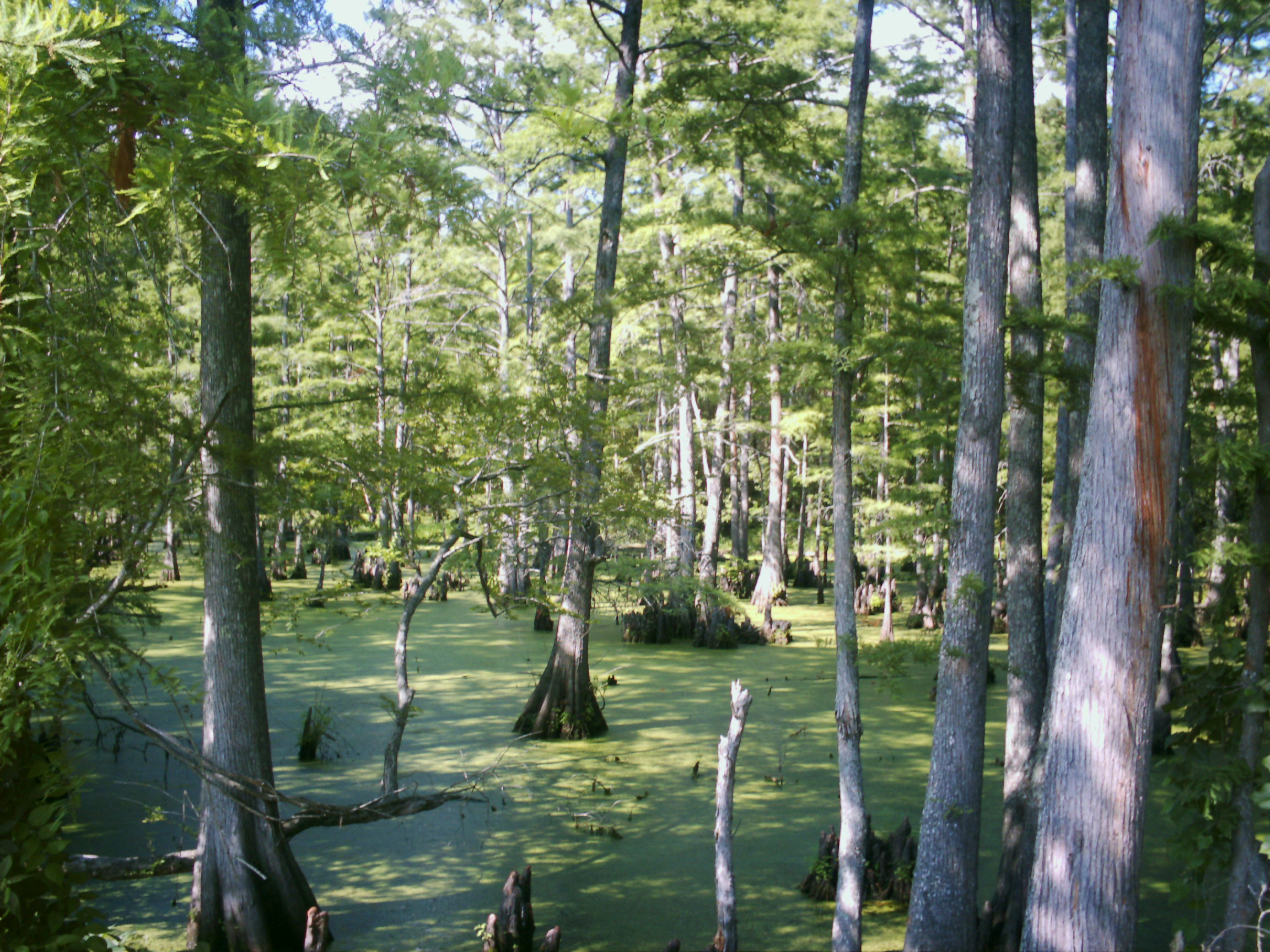 “What…you mean to tell me you can’t see the monster lurking to the left of the center of this photo??!?”

Without doubt, there’s a crowd out there that will take this show at face value, indicative of the fact that the makers of reality television have (by 2014) all but mastered the art of manipulating an audience. When shows like 2012’s Mermaids: The Body Found actually convince a large portion of the viewing population that these mythical beings are real, it may be time for us as a society to seriously investigate why some of us are so willing to believe anything that’s seen on TV (or found on the internet for that matter). In fairness, there are some scenes seen in Beasts that are probably real enough. The sequences involving the actual scientists doing rather mundane experiments and research in the bayou region are at least plausible, seeming less “set up” and more spontaneous – they don’t build to an obvious “cliffhanger moment” right before a commercial break. As has been proven before (in films like the notorious Cannibal Holocaust), if undeniably real sequences are played next to fabricated ones, a viewer is more likely to believe that the faked scenes are in fact real due entirely to the context in which those faked scenes were presented. It’s actually quite smart for the makers of Beasts of the Bayou to use this theory to their advantage.

As iffy as the show is overall, the alternately humorous, informative, and somewhat eerie Beasts of the Bayou is probably about as enjoyable an hour of television as the remarkably similar Mountain Monsters. For Beasts to play as an obvious ripoff of that incredibly questionable Destination America show however tells me that the “monster hunt” genre of television programs is nearing the end of its natural life and probably should be drug out behind the barn pretty soon. Centered around the natural spookiness of the swamps as well as on some creepy campfire tales and local legends, Beasts may have a bit more scary potential than the typical “lets chase monsters around in the dark” program, but it’d be a stretch to call it anything more than an mildly entertaining time waste. In the end, I’m not sure I’d honestly recommend it, even to those who dig monster-oriented programming.