LUNAR CONSPIRACIES REVEALED! ALIENS ON THE MOON: THE TRUTH EXPOSED

ALIENS ON THE MOON: THE TRUTH EXPOSED on Syfy Channel

Cons: …unfortunately, I just can’t buy all of the arguments made by this program

Continuing in much the same way as History Channel’s much-discussed (and derided) Ancient Aliens, the slickly-made and rather compelling original Syfy Channel “documentary” Aliens on the Moon: The Truth Exposed (which premiered on July 20,2014) mainly examines a series of NASA photographs of the lunar surface that may just show anomalous structures built by unknown beings for unknown purposes. Various “experts” of one type or another – from astronauts Buzz Aldrin and Edgar Mitchell to imaging expert Marc D’Antonio, to former government researcher Dr. John Brandenberg and even Ancient Aliens veterans Nick Redfern and Mike Bara (among others – I was expecting Giorgio A. Tsoukalos to turn up at any moment) turn up to offer their own perspective on the images, and analyze the notion that extraterrestrials have visited (or indeed still inhabit) the moon. As its goofy (DUN DUN!) title suggests, Aliens on the Moon is one more in a ongoing (endless?) string of at best speculative, at worst downright phony supposed feature “documentaries” that have played on TV in the last few years. In the end, the program might be interesting and is certainly thought-provoking, but I’m not sure I’d honestly believe everything (or maybe anything) it has to say.

Undoubtedly, the best element of the two-hour special (produced in commemoration of the 45th anniversary of the Apollo 11 moon landing) is the wealth of actual NASA images compiled from both the classic lunar expeditions and more modern flyovers showing various unexplained (or perhaps unexplainable) lunar anomalies. It would almost be worth it for many viewers (particularly those with some interest in astronomy in particular or science in general) to watch this program just to see these stunning, fascinating images while ignoring the somewhat suspect context surrounding their presentation. While I’ve seen some of the images and video footage projected here (even footage taken from Earth’s orbit that appears to show a sort of space battle going on between an unknown craft and missiles that seem to be fired from the planet below), this program does showcase some visual materials that I was previously unfamiliar with, and certainly examines the lunar surface with a more critical eye than some other programs dealing with astronomy.

Unfortunately, the scientific value of the program comes with plenty of baggage: as a straight-faced documentary, Aliens on the Moon is (surprise!) highly suspect. Writer/producer/director Robert C. Kiviat clearly has no intention of making this a well-rounded examination of its subject since there’s virtually no opposing opinion progressed during the course of the piece. This program doesn’t so much make a convincing argument as just pile on supposed evidence, proposing and advancing it’s own theories suggesting that aliens inhabit the moon while “leaving it up to a viewer to decide.” Really, this is all fine and good for the seasoned viewer who’s willing to take this program with the healthy dose of salt that it very much deserves, but things could be more problematic than that. For a more typical viewing public that now believes that mermaids are real, yeti’s are dangerous, and fifty-foot sharks prowl the South African coast (after Animal Planet and Discovery Channel aired “mockumentaries” suggestive of those ideas), Aliens on the Moon could be taken as absolute truth – which it quite obviously is not.

Don’t get me wrong: I love pure edutainment programs like Aliens on the Moon on some level because they do get people talking about and interested in science and the world we live in, but taking this show’s assortment of really iffy “evidence” at face value is not only ill-advised, it’s just plain ludicrous. It’s ironic that one of the program’s main points is to direct questions at NASA regarding their possible doctoring of various photographs taken on space missions in order to cover up evidence of UFO’s and alien structures – what would this show be without a good ol’ government coverup after all – given that many (and very nearly all) of the images presented in AotM as evidence have very clearly been manipulated and toyed with by the show’s producers.

It’s VERY DIFFICULT if not impossible to locate or identify any one of the supposed “alien structures” that we’re led to believe exist in the full-sized photographs of the lunar surface that are the centerpiece of this program – until the producers choose to colorize key portions of said photographs, thus making the program play similarly to a black and white game of Where’s Waldo where Waldo is still wearing his trademark red and white outfit and stocking cap. OBVIOUSLY we as viewers are going to see whatever the producers what us to see when they come close to pointing a huge, flashing neon arrow at various points of the moon’s surface while providing us with a (sometimes preposterous) potential explanation of what we’re looking at. It also helps that the producers decide to virtually beat a viewer over the head with their analysis – we’re almost brainwashed into submitting to the producer’s assertions due to constant repetition of the program’s main points. Whether any viewer believes wholeheartedly what this program is attempting to convince him of largely comes down to said viewer’s natural skepticism and level of gullibility – the actual scientific process going on here is almost nonexistent, and the program honestly seems more like propaganda than honest-to-goodness documentary. 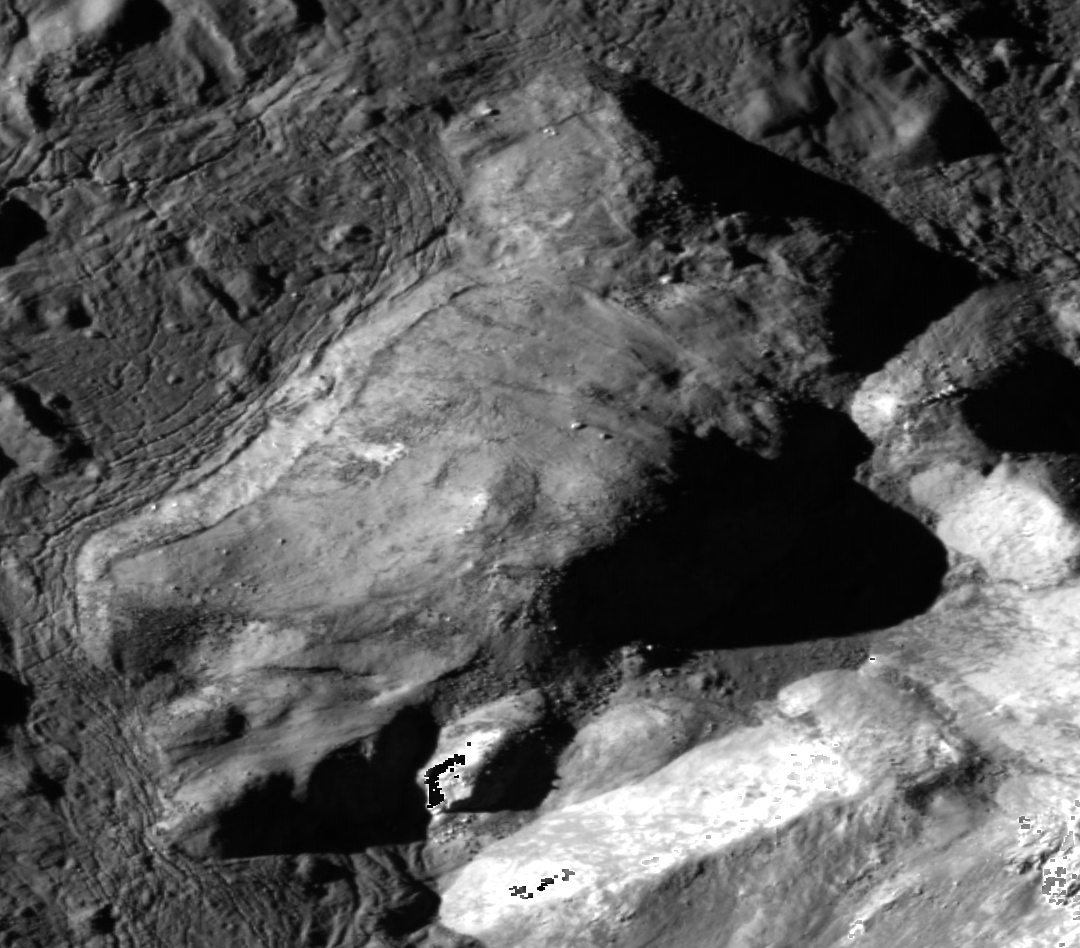 I should also point out that the program’s tendency to be extremely critical of on-camera statements made by Apollo 11 astronaut (and second man on the moon ) Buzz Aldrin – who it should be pointed out, had the balls to appear in a program like this knowing full well that his credibility would likely suffer as a result of the appearance – is none too classy and actually pretty low, even for a show of this nature. Aldrin actually does make a few statements relating to the insinuations of this producers, but when he (perhaps rightfully) refuses to directly speak about or address specific photos of the lunar surface that supposedly show a satellite dish, nuclear plant with some sort of huge weapon pointing out as a defense mechanism, or a landed spacecraft near the moon landing site, suddenly (duh!) Aldrin’s in on the conspiracy that’s taking place. As much of a conspiracy buff as I am myself having watched just about as many alien coverup shows as I can stomach, there comes a point when shows like this that direct all sorts of blame in the direction of NASA and the US government as a whole push credibility beyond the breaking point – and come close to simply be making their assertions in plain bad taste.

At the end of the day, as I hinted at previously, I would want a program like this to prompt discussion and serious thought, and Aliens on the Moon, questionable as it is, certainly does this. Though the constant speculation about what various extremely grainy and difficult-to-interpret photos of the moon’s surface actually show is obnoxious and borderline redundant, the program does pose some intriguing questions and examine some perplexing possibilities. I was pretty intrigued, for example, by the story of a needle-like anomaly photographed surrounding the Martian moon of Phobos in 1989. This unknown object supposedly was responsible for the disappearance of a pair of Russian space probes examining the Martian atmosphere in the late 1980s and was photographed again by NASA’s Curiosity rover that’s currently exploring the Red Planet, suggesting that whatever the thing is, it still patrols the Martian sky. The major talking point of the program for those who watch it will no doubt be footage supposedly taken during a hypothetical (and officially, completely fictional) Apollo 20 mission which appears to show astronauts recovering a female alien body from one of the unknown lunar structures. This footage (which turned up in the internet in recent years along with a pretty bizarre story from supposed astronaut ) is certainly enigmatic; easily the most provocative contained in the documentary, though one would have to accept A LOT of conspiracy notions to believe that it is indeed authentic. If the footage is faked though, it’s ….

At the end of the day, Aliens on the Moon: The Truth Exposed barely sits above its contemporaries like Mermaids: The Body Found, Russian Yeti: The Killer Lives, or Megalodon: The Monster Shark Lives as a purported documentary designed not necessarily to tell the truth but instead, to get people talking. Considering that the public is increasingly fascinated with all things UFO and alien-related (hence why Ancient Aliens’ Giorgio Tsoukalos has his own new UFO-related show In Search of Aliens starting up on History Channel on July 25th), it’s not entirely surprising that Syfy Channel would produce a thing like this and frankly, I’d rather see more programming of this nature on the channel instead of the endless Monster Coelacanth versus Mecha Salmon type of made-for-cable trash the channel is known for these days. Aliens on the Moon certainly isn’t the best, most well-rounded and believable documentary I’ve ever seen – the narration has an inappropriate, semi-pompous tone and the program sometimes seems little more than a lengthy advertisement for a handful of books written about the subject.  Nevertheless, the show does what it’s supposed to: any viewer would be talking about it afterward, and that’s about the best that could be hoped for. Don’t necessarily take every one of its claims seriously, but if you’re bored and this thing happens to be playing on TV, it’d be worth checking out.