“…ANOTHER NAME FOR MARS IS…DEATH!” IT! THE TERROR FROM BEYOND SPACE

IT! THE TERROR FROM BEYOND SPACE

See the, , or release at Amazon!

Cons: Not a “good” movie in the traditional sense

Though it’s perhaps one of the better known of the super-cheesy, low-budget science fiction films of the 1950s, 1958’s It! The Terror from Beyond Space (recognized as being the inspiration for Ridley Scott’s 1979 Alien) is fun, yet pretty run-of-the-mill when held up against the dozens of similar films from the golden age of sci-fi. Taking place in the then-future world of 1973, the film follows the story of the second Mars expedition, in which a crew of astronauts attempt to rescue the sole surviving member of the first Mars expedition. This survivor, Colonel Edward Carruthers, has been accused of murdering the rest of his crew after their spacecraft was marooned on the red planet, and is being transported back to Earth to face a court-martial. As it turns out though, Carruthers’ story about an unknown Martian life form being responsible for the death of his fellow crewmen is actually true. This is bad news for the crew of the second Mars mission – especially when the beast manages to find a way onto their rocket before the journey back Earth.

Running just 70 minutes in length, one might expect that It! would be a model of efficiency – and would be mostly correct in assuming this. I say “mostly” because this film (directed by Edward L.Cahn from a script by Jerome Bixby) is quite talky in its opening quarter hour or so. All this exposition certainly gets the main points of the story across, but scenes in which a group of government officials and reporters are provided with a crash course history of the Mars expeditions seem like unnecessary filler, padding out the run time a bit. Once it’s clear that Carruthers was telling the truth about a powerful humanoid with a tendency to suck the oxygen and liquid right out of its human victims, It! (like the later Alien that follows a similar storyline) becomes a more taut thriller. As the beast prowls around through the spacecraft’s ventilation system and storage hold, killing crew members one-by-one, the surviving astronauts barricade themselves in the control module, trying to come up with some -any- way to slay the creature.

The fact that It! inspired a genuine classic of the sci-fi genre doesn’t necessarily mean that this film in and of itself is really anything altogether fantastic. Cahn’s picture is hampered by a low-budget and somewhat uncreative script development: the film offers up nothing that a viewer familiar with the sci-fi genre wouldn’t have seen before. If anything, It! plays very much like Howard Hawks’ influential The Thing set on a spaceship – both films deal with a hulking creature with vampiric tendencies lurking around an enclosed location and a small cast of characters who have to deal with the beast. Special effects in It! are of the not-so-special variety – images of the rocket ship gliding across a mockup of a star field are pretty lousy and the obvious, rubber suit costume used to depict the titular creature is almost laughably bad (check out the “tongue” of the beast seen through its open mouth – that’s actually the protruding chin of famous stuntman/actor Ray “Crash” Corrigan, who plays the creature).

This image honestly has more creepy potential than the film as a whole.

Aside from the fact that it’s just amusing that this film inexplicably takes place in the year 1973, the entire piece is hilariously off-base in its scientific basis and sense of logic. Is it really a good idea to utilize explosives, gas grenades or even a bazooka inside the confined space of a rocket? And, as if that wasn’t dangerous enough, why in the world would Carruthers and company decide to open the nuclear reactor powering the ship in an attempt to irradiate the creature – and, in turn, the entire flight crew. At no point are any of the ramifications of any of these actions discussed – if you believe the logic of this film, none of these iffy decisions would have any impact on the safety of the crew members or the integrity of the spacecraft itself. I should also put it on record that the sound of a theremin on this film’s soundtrack doesn’t make one of the most pathetic space walks in cinema history any more convincing.

Compared with these ridiculous gaps in plausibility, the fact that writer Bixby throws in the obligatory but improbable romance between a female medical officer (played by Shirley Patterson) and Carruthers (Marshall Thompson, playing the almost pompous hero of the story) seems a minor flaw, but generally speaking, the characters in the film are poorly developed and lazily introduced. Literally, there’s a “roll call” scene in which each actor states his name on camera – it’s impossible to honestly care about any of these indistinguishable people, thereby alleviating some of the tension in the story. Universally too old and too unfit for the rigors of space travel, this group of characters are simply placeholders in the script, arguing about what they should do and mostly coming across as potential monster bait. Increasingly, what happens to any of them seems almost irrelevant – hell, the script doesn’t even focus on the characters at the end of the film, instead it provides a convenient wrap-up for the story told from the perspective of a(n even more nameless) government official. 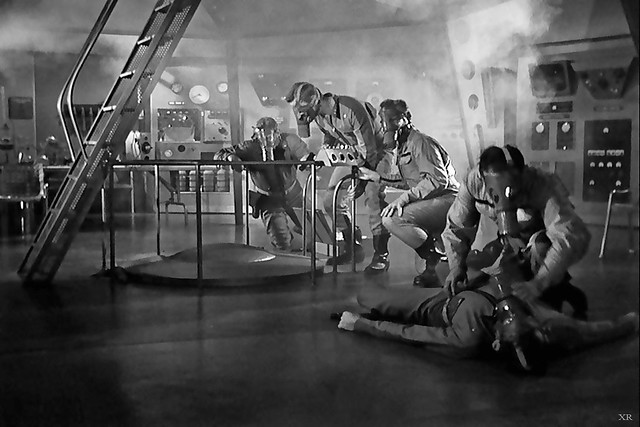 “Pull yourself together Harold…I mean, we only set off gas grenades, wired up explosives, fired a bazooka inside the command module and opened up the nuclear reactor…”

Even if the film is hokey to the extreme and follows a group of characters I didn’t care about, there are some positive elements to the picture. Though I never thought Cahn and his production team quite established a claustrophobic atmosphere that really would have heightened the tension in the story (amazingly, despite the expansiveness of the spacecraft that was the setting for Alien, that film is highly claustrophobic – and unsettling), the set design throughout It! is pretty nifty, and Kenneth Peach’s black and white camerawork is serviceable and attractive. I rather liked Paul Sawtell’s frequently eerie soundtrack music, particularly the enjoyably overbearing “honky” accents used to convey tension or moments of fright. Finally, I’d be remiss if I didn’t mention the (overuse) of sound effects in the film: the title creature’s appearance onscreen is often accompanied by what sounds like an obese man snoring profusely. Good times!

Obviously, It! The Terror from Beyond Space is imperfect – in a film of this nature, that’s almost to be expected, and to be honest, that sense of imperfection is part of what makes this film appealing in the first place. What one really wants out of a picture like this is simply a sense of fun, and I can definitively say that It! delivers in that regard. NEWSFLASH! It! The Terror from Beyond Space is no classic (even when compared to similar, 1950’s B-movies) and won’t be confused with the best movie ever made. Despite the laundry list of potential problems however, this pleasing film would be a gas for those who appreciate older, “so bad, they’re good” genre flicks. I’d recommend it.

Available as a stand alone disc (full-frame, no extras) or as a double feature DVD (with the equally enjoyable giant slug movie The Monster that Challenged the World from 1957; both movies are black and white and full-frame format, no extras). I’d universally recommend the double feature – more bang for your buck!

3/10 : Titular beast kills a few people, turning them into human prunes. Some violent struggles and gunfire; brief glimpses of blood; nothing major.

0/10 : These astronauts keep their mind on the task at hand – ignoring the two females (inexplicably) along for the ride.

“This was the planet Mars as my crew and I first saw it. Dangerous. Treacherous. Alive…with something we came to known only as … Death…”