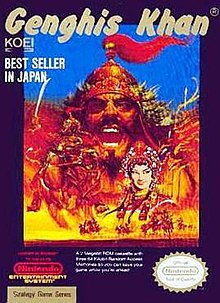 Cons: Unimpressive graphics and sound; some people just won’t like this game

It’s kind of amusing to look at what games for the Nintendo NES are the most sought after by collectors today, some three decades after the system debuted. Many games are quite highly-regarded by players (Super Mario Bros. 3 comes to mind), but were produced in such large quantities that one can find these games almost anywhere. On the other end of the spectrum are the games produced by Japanese game developer Koei. While companies like Konami and Ultra Games became known for the action titles they put out by the truckloads, Koei almost exclusively developed remarkably in-depth strategy games. Often, these games had downright bizarre titles like Romance of the Three Kingdoms and Nobunaga’s Ambition, and they frequently focused on historical events and periods. Though their offbeat titles ensured that I would ignore the company’s games for years (why would I play something called Bandit Kings of Ancient China when the video game of Attack of the Killer Tomatoes was right there??), in the early 1990s, I happened to give one of Koei’s games a shot and I’ve pretty much been hooked on them ever since. 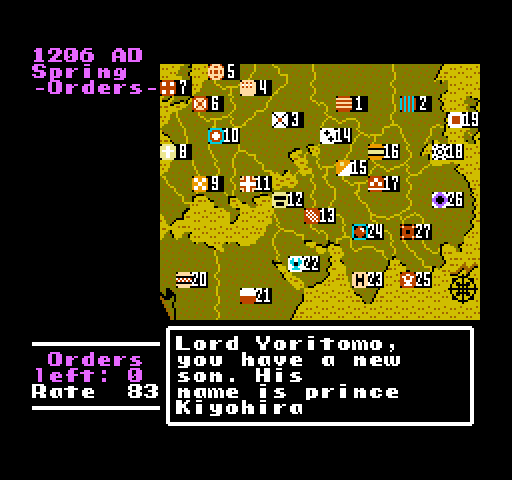 The world map – the player’s goal is to conquer it.

Genghis Khan, a turn-based strategy game produced in 1987 for various (extremely primitive) home computer systems, was ported for the NES in 1990 and offered up two scenarios in which a player assumed command of an ancient tribe or country if you will. Scenario one, “Mongol Conquest,” in set in the year 1175 AD and saw the player assume the role of young Temujin (who later would become the ruler known as Genghis Khan) as he attempted to unite the Mongol tribes under one banner. Scenario two was the bigger and better “World Conquest” which begins in the year 1206 AD. When starting a new game, up to four human players competing in the scenario would choose between four historically-based world leaders (from Mongolia, England, Byzantine, or Japan) and set out to conquer the world. This was done by executing domestic and international policies, building up individual states, keeping civilian populations happy, trading specialty items for weapons and food, negotiating with other countries, and taking command of military units to defeat enemies. Though a player can use diplomacy to aid his campaign, in the end the only way to win the game is to use military might to crush his opponents. 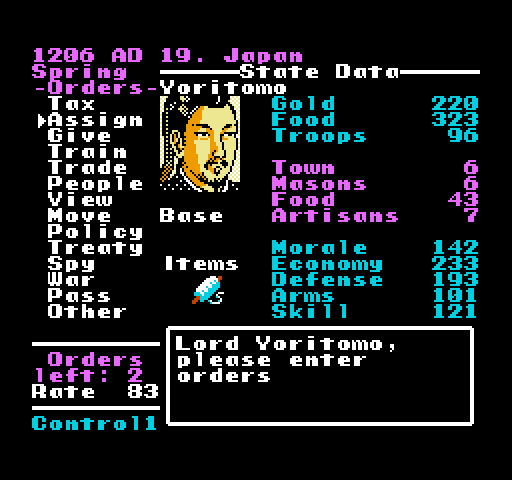 The main game screen, which shows information about the player’s country and the various commands a player can execute on his path to world domination.

The scope of this game is pretty darn impressive for the time any way one looks at it, and though the game is difficult to describe, I’ll give it a go. The “world” as it exists in the game features all of Europe and Asia along with a bit of North Africa, and has 27 separate states (or countries if you will), each of which has its own geography, economy, civilian population, and military along with a unique ruler. During each of the four seasons of the year, players are given three “moves” and with these limited amounts of moves must manage various – and indeed all – aspects of their country, keeping the populace under control while expanding their territory through the use of military might. Each task a player does, from trading goods for profit, to training soldiers, to choosing new military leaders, to spying on enemies, to actually invading another country, has ramifications: assigning more troops to your military potentially takes them away from tasks that are needed to build up a country’s economy and defenses, but computer opponents are all too willing to take advantage of a country that has stretched its military resources a bit too thin. At the same time, by spying on enemy countries, a player can spot opportunities to swoop in and devastate enemy armies while minimizing casualties of his own. It’s also important to note that each playable character has ability parameters which deplete with every action he undertakes. Thus, the player has to manage these levels in order to keep moving forward in an effective, efficient manner.

A player could easily spend hours and hours of time building up his country since this game does a fine job of simulating domestic policy management, but eventually he will be forced to go on the march and invade a neighboring nation. This is where Genghis Khan (which feels a bit like an elaborate chess game from the beginning) truly starts to look like a game of chess as well, since the battle sequences involve a player navigating his military units through a battlefield of varying terrain while attacking enemy units whenever possible or desired. Battles in the game are relatively simple in terms of their onscreen construction, but strategy again plays a key role. Depending on how the terrain and skills of various military units are utilized, it’s possible (and extremely satisfying) to overpower a superior enemy force. Conversely, having a overwhelming military force doesn’t necessarily mean that a battle would be a cakewalk since, as in real life, an enemy force backed against the proverbial wall is an extremely dangerous one.

Thankfully, Genghis Khan makes up for its lackluster graphics with captivating gameplay.

Ultimately, this game is all about time, energy, resource, and personnel management – and success in the game is very much dependent on simply practicing and playing extensively to learn the ins and outs of the game’s mechanics. It’s no exaggeration to say that each time a person plays this game, it will be a different experience – or to say that it would take hours and hours and hours to actually win the game, let alone master it. I’ve had this game in my collection since the early 1990s, have spent WAY more time than I’d ever care to admit on it, and have actually, honest-to-goodness beaten the game a grand total of once. In some ways, it’s more fun and satisfying to start over after awhile and build up a country anew instead of pushing towards achieving total victory – at a certain point, this game has a tendency to become very frustrating. That said, I’d probably consider this one of the most mind-bogglingly difficult, complex, fascinating and addictive games ever made for the NES.

While the game is a dream come true for history or strategy game buffs, there’s a heapload of potential problems with this Koei game and most others from the company. Simply put, Genghis Khan is not designed for those who want instant gratification – the game is slowly-paced and would be devastatingly tedious for many people used to the slam-bang action of the typical NES platformer. Honestly, I think only a very select group of gamers would enjoy this title – but those who would be open to a game of this type would probably REALLY LIKE this game. It’s also worth noting that I believe this may be the most intricate “build up your nation and conquer the world” game Koei ever developed – the Super NES sequel was nowhere near as in-depth as the NES version, which is more than a little disappointing. Every character in the game has a variety of attributes that can be build up over time, as well as a unique portrait.

Graphics here are downright lousy and noticeably dull and drab. There are precious few actual animations in the game – most everything here is relayed via static screens. Despite the graphical limitations, what is here looks decent considering when the game was made and I do like the fact that every character in the game (i.e. the rulers of every state along with a never-ending string of potential officers) has their own portrait. The sound present in the game is of slightly better quality –most every country in the game has an individual music piece associated with it, and these themes effectively convey the cultural differences between different locations. Unfortunately, every battle plays out to the same, monotonous tune and I suspect that most players will quickly tire of the repetitive sound design. I usually put on some background music of my own when I play this game just to make it more tolerable. There is a TON of stuff for a player to discover about this open-ended game, most of which can only be learned by playing it for long periods of time. Aside from other games released by the Koei corporation, I’m not sure I could come up with another NES game that’s quite this detailed – if a player “got into” this game, he likely could keep playing it intermittently for years and years. There’s a reason why many, many NES games have been lost to the sands of time, yet Koei games continue to be talked about with reverence. These games quite simply are some of the most demanding, challenging, potentially addictive, and utterly unique games made for the system. Genghis Khan surely wouldn’t win any awards for being the most visually-impressive game out there (even for the woefully outdated NES), but this cartridge packs a lifetime of gameplay that a select few, hardcore gamers will find themselves coming back to again and again. If it sounds at all intriguing, I’d highly recommend you check this game out – I’d easily place it in my list of top ten NES games.

Title screen and a brief look at the gameplay (with music):