Pros: No more potty humor! Kudo vs. Shark is a spectacle for sure

After six volumes of agonizing Japanese Frontier Martial-Arts Wrestling DVDs loaded with bad jokes and downright inaccurate information, the producers of TokyoPop’s FMW video series finally changed things up with Yokohama Deathmatch. This DVD features matches which all took place on April 29, 1997 at the Yokohama Arena, an event which had a triple main event. American wrestling fans would likely be most interested in the second of these, which featured well-known wrestlers Terry Funk, Cactus Jack and Mike “Gladiator” Awesome taking on a trio of Japanese stars in an anything goes, Texas Tornado Street Fight, but the final main event is the one most likely to shock a viewer with its pure brutality. In this match, billed as popular ladies wrestler Megumi Kudo’s final bout, Kudo took on longtime rival Shark Tsuchiya for the Unified FMW Womens Wrestling Title in a “No Rope, Electrified Barbed Wire, Explosion Double Hell Match.” In other words, it was the kind of outrageously violent stipulation contest that put the FMW promotion on the map in the first place.

Though the fact that this volume of the FMW video series jettisons the puerile humor that all but ruined previous volumes is refreshing, the first thing a viewer might notice about the announce team of John Watanabe and Dan “The Mouth” Lovranski (making his debut as an FMW announcer) is that these two are boring to listen to. Yes, they have all their facts right, and actually do a fine job of calling the match, but the excitement level of the tape suffers from their generally unexciting commentary. I never thought I say this, but I actually think that when you’ve got women being tossed into barbed wire, screaming in pain as they bleed all over the mat, it pays to have some sense of humor applied to the show. It’s almost like the commentating in the FMW series went from one extreme (all jokes; no content) to the other (solid wrestling fundamentals and history; zero humor). I wish they would have found some sort of a middle ground where the commentators did a decent job of calling the action, but knew how to make this DVD fun to watch.

The Headhunters – most acrobatic fat men in the game. Seriously.

A bigger problem with Yokohama Deathmatch is that the program only contains three matches in (more or less) their entirety: the entire undercard of action is only briefly featured in a ten-minute or so, heavily-truncated batch of edited highlights. Matches include:
> Tetsuhiro Kuroda and Hayato Nanjo vs. The Crypt Keeper and Flying Kid Ichihara
> a ten-woman bout with the team of Kaori Nakayama, Michiko Oomukai, Chikako Shiratori, Mizuki Endo, and Yoko Ikeda against that of Lioness Asyka, Eagle Sawai, Crusher Maedomari, Michiko Nagashima, and Miss Mongol
> Jinsei Shinzaki (better known as Hakushi) vs. Super Leather
> Kodo Fuyuki, Jado and Gedo vs. Hisakatsu Ooya and The Headhunters
This lineup of undercard bouts seems irrelevant and pointless. If I’m watching a wrestling DVD, I want to see complete matches since it’s the oftentimes the buildup in a match (or lack thereof) that makes a wrestling contest good (or conversely, bad). Highlights look cool on YouTube, but they don’t give a viewer an appreciation for how any of these matches actually went down. No stars for this hodgepodge of worthless highlights.

Anyway, the main program of Yokohama Deathmatch includes these matches:

1. Hayabusa vs. Mr. Ganosuke – The culmination of a long-standing feud (set up by a brief video segment), this contest pits two wrestlers who started in the business at the same time and once were considered friends, facing off in a “Hair vs. Mask” grudge match of sorts. If Hayabusa wins, he can shear the hair off Ganosuke; if Ganosuke wins, he gets the mask of Hayabusa as a trophy. As might be expected, Ganosuke – the obvious villain (or “heel”) of the match – uses dirty, hard-hitting tactics throughout, attacking Hayabusa with a pointed stick, making the most of outside interference, and using Hayabusa’s own finishing move against him. Hayabusa, known for his technical brilliance, flies off the top rope and performs his usual array of dangerous, acrobatic lucha libre moves. This match is about what one would expect, and the real fireworks with regard to the developing storyline between these two, occur post-match in a tearful confrontation between the two wrestlers. Without giving anything away, let me just say that this friendship is not in the least repaired by anything that happened here. I’d give the match three and a half stars out of a possible five.

The one and only Hayabusa and his trademark Bela Lugosi hand signals.

2. Atsushi Onita, Kintaro WING Kanemura, and Masato Tanaka (Frontier Martial-Arts Wrestling) vs. Terry Funk, Cactus Jack, and Mike “Gladiator” Awesome (Funk Masters of Wrestling) – As was the case in many wrestling promotions in the late 1990s, this Texas Tornado Street Fight chronicles a feud between two FMW factions, the American team of Funk, Cactus and Awesome, and the “real” FMW of Tanaka, Kanemura, and the legendary Onita (who actually was the founder of FMW in 1989). It’s always cool to see hardcore wrestling specialists Funk and Cactus in action: these two had legendary battles in the land of the rising sun and elsewhere, and this match would actually be one of the final appearances of Cactus Jack (a.k.a. Mick Foley, who was, at the time, signed with the WWE as “Mankind”) in Japan. While one might have been expected an outrageous bloodbath, this contest is mainly just one big, out of control brawl, with the participants settling long-standing debts with one another. That said, there’s quite a bit of bloodshed here, and it’s Onita who, perhaps unsurprisingly, takes the brunt of punishment, being burned with a flaming branding iron and set on fire with rubbing alcohol. Jack seems almost to stay out of the action for the most part, leaving the extreme violence to Funk and actual wrestling to Awesome, who pulls off some brutal moves, including powerbombing Tanaka through a table from the top rope. In the end, despite the billing of some big-name wrestlers, a hilariously awful Japanese cover of the classic rock song “Wild Thing,” and an exciting series of pinfall attempts and near-escapes, this whole match was unremarkable, as if the Americans just wanted an easy paycheck – let’s not forget that Funk and Cactus were huge stars in Japan at the time. I’d give it three stars. 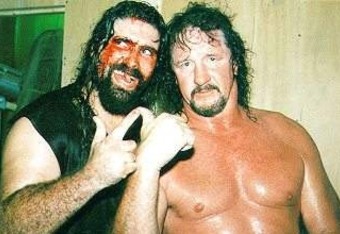 3. Megumi Kudo vs. Shark Tsuchiya – This violent contest for the unified FMW Womens Championship is the type of thing that put FMW on the map, featuring extreme violence and crazy stipulations. The ring ropes on two sides of the ring have been replaced with electrified barbed wire that’s rigged to explode when one of the wrestlers comes into contact with it. The other two sides of the ring are open, with beds of exploding barbed wire placed on the floor outside the ring. To say that women’s wrestling in Japan isn’t just a T&A show only goes so far until one gets a load of a match like this, in which two women absolutely destroy one another. Tsuchiya introduces a large sickle into the match which she uses to carve up Kudo’s face, and eventually blows a fireball right at her opponent’s head (check out how Kudo’s hair is singed by the flames, becoming more mop-like as the match goes along). It’s pretty amazing how much punishment Kudo takes in this, her retirement match – including a sickening powerbomb from the ring apron into the explosive barbed wire beds on the outside. Since her legs catch the side of the ring, Kudo’s lands neck and back first onto the floor – this would be bad enough, but with the barbed wire and explosives…it becomes something even more devastating. Suffering from the fact that there isn’t much room for the participants to maneuver inside the ring (be prepared for many “tests of strength” …yawn), this isn’t quite up to the almost ridiculous standards of the (infamous) Kudo vs. Combat Toyoda electrified barbed wire match which was beyond belief brutal. Still, it’s a definite spectacle, and a lot more insane than what many people would be used to. Four stars. 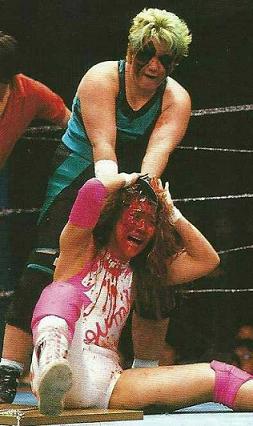 Kudo and Shark battling it out – notice strategic use of the ninja sickle.

At the end of the day, we have another (SURPRISE!) hit-or-miss FMW DVD. On one hand, it’s nice to see that TokyoPop listened to fans and abandoned the sophomoric humor that plagued earlier volumes of the series. Unfortunately, the problems relating to how the producers and editors handle the original footage still remains: the (in some cases, severely) truncated matches here are just annoying, and I think it would have been a better choice to leave them off this program altogether. Clearly, the focus of Yokohama Deathmatch was on the trio of main event-type matches, and though these feature contests are decent, I was left underwhelmed. These bouts sound great on paper, but in my opinion, none (by a long shot) represent the best of what this Japanese wrestling promotion had to offer. Fans of so-called “garbage wrestling” or the “hardcore” wrestling style would probably enjoy this DVD since it is quite a bit more violent than what one would typically see in any American promotion, but there’s a lot better out there for the more discriminating wrestling fan.

Full-Frame “Uncensored Version” DVD from TokyoPop has decent but somewhat soft picture quality. Included as extras, we have (inexplicably) a “wrestling school 101” segment with previous host Eric Geller, a gallery of wrestler biographies, a text-based history of the FMW promotion, post-match footage from the Kudo vs. Shark match (most amusing for the baffled reactions of some of the photographers covering the event), and a bonus match:
Ricky Fuji vs. Taka Michinoku – Thirteen minute match hacked down to three, though one can clearly get an idea of why Michinoku was one of the most highly-regarded young Japanese wrestlers in the 1990s. His ability to pull off lightning fast moves is remarkable, and he pretty much puts Fuji to shame here. One star for these heavily edited highlights – one has no idea how this match actually played out.

0/10 : May be the only FMW tape of the series thusfar that doesn’t include some minor/major profanity. This volume is pretty clean.

0/10 : Women being barbecued against electrified barbed wire, and tossed onto explosive land mines. Yeah, I didn’t think so.

7/10 : Has its moments of ridiculous brutality, but scarily enough: there’s worse out there.