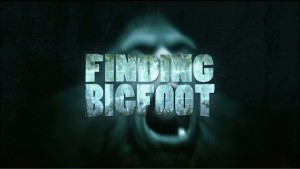 Cons: Way too formulaic from episode to episode; will they ever FIND Bigfoot?

Premiering in 2011, Animal Planet’s usually hour-long Finding Bigfoot program not only jump started the recent Bigfoot craze, but also has provided the blueprint for other, equally asinine programs (Uncovering Aliens and to some extent, Mountain Monsters spring instantly to mind) which attempt to probe the existence of monsters and aliens while answering the question of just how low some people will stoop to make a hit TV show. Finding Bigfoot follows a team of four investigators – Matt Moneymaker (founder of the Bigfoot Field Researchers Organization), field researchers and Sasquatch experts Cliff Barackman and James “Bobo” Fay (who both previously appeared on History Channel’s Monster Quest), and biologist Ranae Holland (the obligatory “skeptic” whose primary task on the show is to question and criticize any “evidence” of the creature) – travel around the United States and, in some cases, the world in search of large, unknown hominids. Undoubtedly, the most remarkable thing about this show is the fact that, after four seasons of episodes, a viewer is no closer to determining whether or not Sasquatch actually exists. Sure, the program has produced some interesting footage, physical evidence (such as footprints and hair samples), and perhaps most notably, strange sound recordings that seem to feature vocalizations of unknown creatures prowling America’s wilderness, yet hard evidence proving once and for all the existence of Sasquatch has turned out to be as elusive as the beast itself.

Finding Bigfoot began its fifth season on June 8, 2014, and frankly, I’m a bit surprised the series has lasted that long. The obvious main problem with this program – I mean aside from the fact that if the group actually FOUND Bigfoot, the show would no longer be necessary – is the fact that by now, each and every episode is painfully formulaic, consisting of nearly identical material from show to show. Finding Bigfoot operates under a rigid (and by this point, stale) format in which, following a brief introduction and look at sometimes intriguing but more often lousy and sketchy video or physical evidence, the investigators embark on a “night investigation” which doesn’t so much capture evidence of Bigfoot activity, but instead shows that whatever region the investigators find themselves in is indeed “Squatchy” – an area that would, in theory, have the resources to support a population of large, bipedal primates.

From this point, every episode only gets more tiresome, with the team calling a “town hall meeting” to hear increasingly eccentric stories about Bigfoot encounters from local eyewitnesses. While three of the team examines and recreates a few of these encounters, with the physically imposing and rather burly “Bobo” used as a stand-in for Sasquatch, the remaining member embarks on a “solo investigation” in which he or she surveys the local landscape in search of the perfect Squatch habitat. Without many exceptions, these solo treks (which quite obviously aren’t actually solo journeys since there’s a camera crew along to document the whole thing) provide absolutely zero evidence of a Sasquatch. The climax of every episode is provided in the form of a final night investigation in which the team uses wood knocks, animal calls, and a variety of other techniques in an attempt to elicit a response from local Sasquatch populations. Scanning the geography with thermal cameras, the researchers often record various animal sounds – some of which are unexplainable and perhaps somewhat indicative of something strange in the woods. Perpetually though, any Sasquatches lurk just off-camera, thus we never quite get the A-HA! evidence that a viewer would ideally want.

Season five’s first episode took place in the northern tier of the state of Kentucky, an state which has hosted a Finding Bigfoot investigation before. After examining footprint casts made in the region, some of which were acquired just days before the arrival of the investigators, the gang sets out into the woods and manages to record some faint wood knocks, a behavior that’s proposed to be a way in which Sasquatch communicate with one another by banging on trees. Recruiting the help of local outdoorsman Ernie “Turtleman” Brown, Jr., who has his own (possibly even more ridiculous) Animal Planet show called The Call of the Wildman, Bobo and Ranae embark on one of the most absurd and fruitless night investigations ever seen on the show, while Cliff interviews some witnesses and Matt pokes around by himself in the Kentucky countryside. By the end of the episode (which is mainly noteworthy only for the fact that one of the eyewitness accounts is determined to be not credible – a rarity on a show in which Moneymaker, Barackman and Fay in particular, seem to believe every single witness account no matter how outlandish they are), the team describes their investigation in Kentucky as “eventful,” a claim which doesn’t seem substantiated by the program itself. Yes, there are some noises heard in the woods that would sound strange to the average viewer (especially to those who don’t spend long amounts of time outdoors), but without actually finding the source of those sounds, it’s impossible to speculate on what actually produced them.

With the sense of familiarity from episode to episode of this show being almost absurdly high, it begs the question of why anyone would really want to watch it. Quite honestly, the only reason I can come up with for the popularity of this program (which ranks as one of Animal Planet’s most popular, sitting alongside the infinitely more factual and authentic River Monsters) is that the viewing audience, raised on conspiracy theories, science fiction and monster movies, desperately wants to believe that Sasquatch exists, and honestly, who can blame them? In an era where many theories about unknown animals, locations, and circumstances are flat-out discredited by a scientific community who seems more willing to fall in with the status quo than take a chance in honestly evaluating hypotheses proposed to them (which to me seems to go against the very notion of the scientific process – it’s typically the “out of the box” thinking that’s resulted in honest progress and enlightenment throughout history), it’s refreshing to hear about things that mainstream science doesn’t put much faith in.

Sad thing is, the logic in the show does almost work in this way.

I’ll be the first one to admit that I’m a sucker for these types of shows – I’ve been fascinated with cryptozoology literally for decades and I would count myself as a person who does desperately want some of these mythical creatures to exist. Finding Bigfoot though, despite benefiting greatly from the conviction of its “researchers” and their playful rapport with one another, is only slightly more credible than an obvious load of malarkey like Mountain Monsters. The same, lousy CGI effects used to visualize Sasquatches in poorly-concocted recreations along with the extremely predictable formula of the show and behavior of the various team members are bad enough, making it seem like if you’ve seen one episode of this show, you’ve seen them all. The most perplexing and annoying element of the show however – and one that has similarly ruined numerous “ghost hunter” type shows – is that the sound engineers insist on having music cues and sound effects trample over field recordings which supposedly capture Sasquatch vocalizations. When a viewer is straining and struggling to pick out these distant, screechy sounds which under the best conditions, are difficult to hear, it’s incredibly irritating when post-production sound intrudes. One has to wonder then if the producers really have any interest in actually proving the existence of these creatures in the first place. As I stated before – would this show even have any reason to continue if Bigfoot actually was found?

Still the most compelling – and controversial – piece of evidence supporting Bigfoot’s existence: the Patterson-Gimlin film.

Though this show (like many similar programs) is entertaining on a certain level and does deal with subject matter that many people quite obviously find interesting, Finding Bigfoot doesn’t truly satisfy, paling in comparison (particularly in terms of its entertainment value) when placed alongside the goofy but intriguing Destination: Truth. Unlike that program’s mostly skeptical host Josh Gates, most of the Bigfoot investigators have a tendency to jump to conclusions (“that’s a Squatch!!”), and the obligatory skeptic along for the ride doesn’t do much to offset the pervading notion that every single sound or unexplained event in the woods is the direct result of Sasquatch activity or presence. I believe I’ve seen most every episode of this show, and though there have been some thought-provoking moments in which I couldn’t quite put my finger on explaining the evidence provided, the entire series has increasingly seemed tiresome and exhausting, not illuminating or legitimately convincing. As it begins a completely unnecessary fifth season, it quite honestly feels like this show is being produced simply because people expect it to continue, not because it really has anything new to prove or say. Thus, Finding Bigfoot now simply preaches to the choir of believers while making the rest of the world chuckle at just how ludicrous the whole thing is. Most people would be better off not wasting their time.