“DON’T TELL ME YOU BELIEVE THIS SAUCER BUNK!??!” THE VINTAGE U.F.O. “DOCUMENTARY”

Cons: Unconvincing and tedious, with too much talk and too little actual evidence

Produced in 1956 in the midst of the “baffling saucer problem,” Unidentified Flying Objects: the True Story of Flying Saucers, or simply U.F.O., may be the most dull and unexciting program dealing with a potentially fascinating subject that I’ve ever seen. Proposing to expose the reality of UFOs by examining various Air Force records, eyewitness accounts and (GASP!) actual footage of UFOs in America’s skies, the film plays as a sort of docudrama, following the (quite obviously, invented) story of a military press correspondent who’s forced to reevaluate his stance on the existence of these craft after he’s overwhelmed with “evidence.” It’s immediately apparent that this film has the best intentions and takes itself (a little too) seriously, but its effectiveness is limited by its sluggish pacing and relentlessly talky nature. Most perplexing however is the fact that even when given the chance to really nail home it’s arguments, director Winston Jones and writer Francis Martin hold off on going for the jugular. In the end, the film is interesting only as a product of its time, not as a compelling persuasive piece. 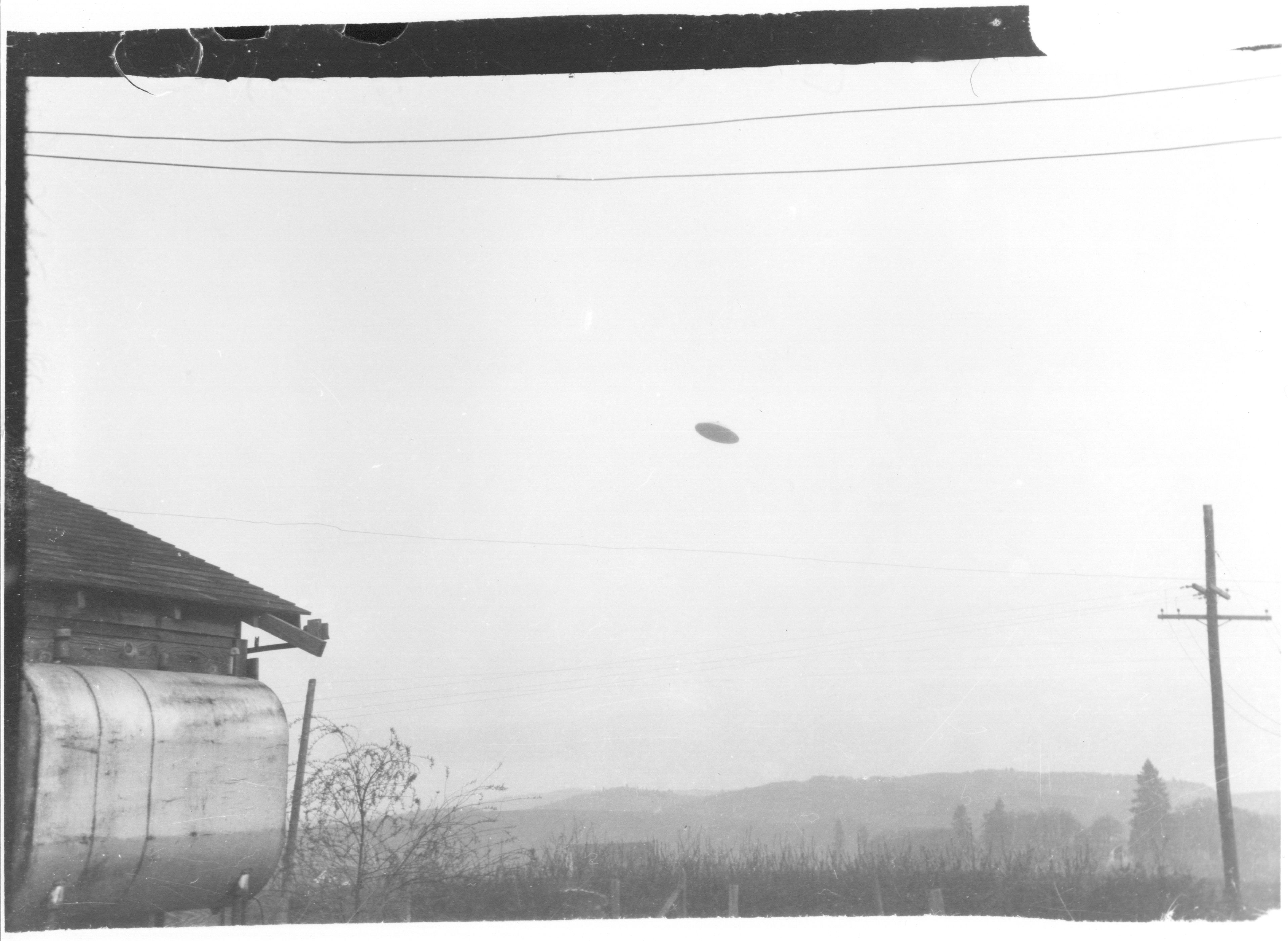 One of the more famous UFO photographs of the 1950s.

After the typical introduction, typed out and read by booming-voiced narrator Les Tremayne, that initially illustrates this film’s almost overbearing insistence that everything contained in it is factual (an insistence that gets all the more pompous as the film goes along), U.F.O. begins with a crash course in the history of flying saucers. A detailed account of pilot Kenneth Arnold’s encounter with a swarm of unknown aircraft in 1947 is recounted. The Arnold sighting is regarded as the first well-known report of UFO activity, and it’s Arnold’s description of the things he saw that led to the term “flying saucer” entering the public consciousness. Next, we have a (lousy, unconvincing) recreation of an incident from 1948, in which an Air National Guard pilot pursuing an unknown craft crashed in the Kentucky countryside. Though it’s likely that pilot Captain Thomas Mantell blacked out due to hypoxia and lost control of his aircraft, he’s regarded as one of the only UFO-related casualties, and his death prompted Air Force authorities to begin to seriously examine the UFO phenomenon. About this time in the film, the pure documentary format is abandoned in favor of presenting the story of Albert Chop, Air Force information officer. Initially a skeptic, Chop eventually comes to believe that UFOs do in fact exist. The process by which he comes to this conclusion (mainly by examining first hand accounts of flying saucers and by talking to fellow actors….er…military personnel) makes up the basis of the film.

One of the more disappointing aspect of U.F.O. is that, compared to contemporary programs dealing with UFOs and aliens, there is precious little evidence presented in this film – just a cast of characters and actors telling the viewer that these craft exist. Right when supposedly authentic film evidence is presented for the camera – after a prolonged build-up leading to the exhibition of said film footage – director Jones only sees fit to include very brief (we’re talking around half a second) snippets of the actual UFO footage. Doing this not only is very annoying (isn’t the point of this film to provide hard evidence for the existence of flying saucers?), but it also makes the whole film seem like a tease. As if this wasn’t bad enough, by any stretch of the imagination, this film is damningly boring, with non-actors (Tom Towers, who plays Chop, was an actual journalist recruited to give the role an authentic flavor) reciting lines in an almost zombie-like manner. Listening to a play-by-play of a radar operator guiding a plane in for landing is excruciating to watch and almost laughable in the way its constructed onscreen: in a tight close-up of the operator’s face as he delivers repetitive instructions in monotonous voice. Supposedly, this scene (and a subsequent, even more painfully lengthy sequence in which a group of characters stand around watching radar blips for what seems like fifteen minutes or more) are presented to show that radar can be used to authenticate UFO sightings, but the end result in the film is that a viewer is likely to be nodding off while all this goes on.

“Great…now just hold that shot for the next fifteen minutes…”

Photographed unimaginatively by Howard A. Anderson, the picture relies exclusively on various talking heads explaining the UFO phenomenon as opposed to any sort of action-oriented footage or interesting visual compositions. Ernest Gold’s music is majestic but similarly uninteresting, failing to add much punch to the tiresome array of pointless scenes. The film includes no special effects whatsoever, thus we have recreations where actors sitting in a mock airplane cockpit pretend to see some sort of unknown craft whizzing by the cockpit. Since we neither see actual nor special effect flying saucers, these recreations are woefully inadequate in convincing a viewer of anything aside from the fact that this film was apparently made on a shoestring budget.

If a viewer does get through the whole docudrama (which, I should add, throws in completely unnecessary filler dealing with Chop’s family – “my son was born blind in one eye, making it difficult for him to play with other boys” COLLECTIVE GROAN), he’s rewarded by the final ten minutes of the film which TA-DA! present two instances of actual UFOs photographed on motion picture film – in color no less! To say this grainy and shaky footage (which does little more than show small, distant white circular objects moving on a blue background) is underwhelming does the footage a service it probably doesn’t deserve, but the filmmakers try and make the most of it irregardless. Using film manipulation techniques, we see the objects in close-up and slow motion, and through this study of the images, a viewer can almost begin to believe that we’re seeing something out of the ordinary. Much like the typical UFO footage of today though, it’s impossible to even speculate on what it is we’re seeing here, and I would be shocked if anyone was wowed by this evidence which, if we’re to believe the film, was “placed in the care of (a California) insurance company” for safe-keeping. Really??!?

Viewed today, U.F.O. seems very old-fashioned and woefully inept at making its arguments. The film really is all talk, with minimal, rather sketchy evidence provided in an attempt back up any of its claims. Dialogue throughout the picture is too technical and detailed for the average viewer to even follow, let alone be interested in. As it is then, the film is awful as entertainment, and may be of interest only for showing a much different time and place, when the UFO/alien culture was just beginning to grab hold of public consciousness. I found it amusing to see what this film did or didn’t mention: for instance, while there is a section of the picture that deals with the multiple UFO sightings that occurred over Washington, D.C. in the early 1950s, there’s no mention of the alleged crash of a flying disc outside Roswell, New Mexico in 1947. It’s also worth noting that at no point does this film discuss any sort of government cover-up – hell, the picture not only focuses explicitly on what the military claims to know about flying saucers and chronicles the various official inquiries into the subject, but seems to have been produced with the full cooperation of the Air Force, who even provided some archival footage. Conspiracy buffs may enjoy this film for its historic value, but the picture is unlikely to sway a viewer’s opinion one way or the other with regard to its topic. Tedious and lame, this supposed documentary is mostly a waste.

Unsurprisingly, this film has never been put onto DVD. It does play on TCM once in a while, has received a VHS release, and can be watched in its entirety on YouTube. Bored? Watch the whole darn movie and be put to sleep!