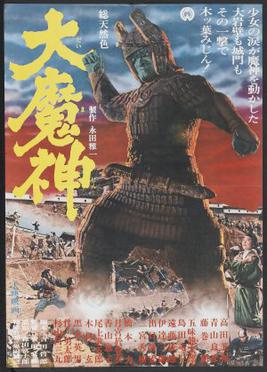 The Complete Series or at Amazon

A sort of combination of a samurai period drama with Godzilla-style monster movie, the 1966 Japanese film Daimajin (also known as Majin, the Monster of Terror in its English dubbed version) fails to satisfy on either level: too predictable as a samurai flick and too downright dull to compare to the best of the Japanese monster films. Similar to the tale of the , the story takes place in feudal Japan and begins with an evil samurai (in case we’re not sure if this is the bad guy, he and his men address old women as “hags” and children as “brats,” frequently cackling maniacally for no reason whatsoever) staging a violent uprising against the lord of a small fiefdom. After killing all the family members of the ruling Hanabasa clan save a young prince and princess who miraculously escape into the mountains, the evil Samanosuke enslaves all the villagers, forcing them to pay exorbitant taxes and work tirelessly on the construction of a massive fortress. As they grow up in the mountains, the Hanabasa prince and princess learn about the mountain god Daimajin, who they believe will one day return to free the villagers from enslavement and restore the region to the rule of the Hanabasa clan. This legend doesn’t sit well with Samanosuke of course, and he sets out to capture the remaining Hanabasa family members. When he attempts to demolish the large stone statue of Daimajin however, it appears he’s finally crossed the line. The statue comes to life and embarks on a mission of vengeance, but can anyone – even the princess who willed its return – truly control the beast and stop it from destroying everything in sight?

A really nice effects shot showing Daimajin resting in his mountain hideaway. Insert your own “the hills are alive” punchline here.

Produced by the Daiei Film studio as a sort of competition to the Toho studio’s incredibly popular Godzilla franchise, Daimajin attempts to combine the best elements of the popular films of the mid 1960s. Director Kimiyoshi Yoshida had previously made quite a name for himself in the Japanese swordplay film genre, having made at least six entries in the well-regarded Zatoichi series that dealt with a blind swordsman. Unfortunately, Yoshida seems to have been a bit out of his league in trying to make Daimajin into an entirely successful film on any front. The script by Tetsuo Yoshida is relentlessly slow to get going, utilizing the basic samurai film formula that, by 1966, had been thoroughly played out. The mid 1960s was a time when (in a manner similar to what Italian filmmakers were doing with the western genre) younger filmmakers were revisiting the classic samurai films and injecting them with new energy: simply copying the basic scenarios thought up by the likes of Akira Kurosawa and Hiroshi Inagaki wasn’t going to excite audiences anymore – especially since wild and violent fare such as Kihachi Okamoto’s Sword of Doom was appearing in cinemas at the same time. In the end, Daimajin simply offers up period drama that most viewers would have seen time and time again; it’s undeniably bland.

Complimenting the problems for a viewer is the fact that the actual “monster film” content of Daimajin is minimal: it takes a good 70 minutes or more of this 90 minute film for the much-discussed titular creature to even make an appearance. The fact that this film cries wolf too many times is the biggest single flaw of the production since, compared with what Toho was doing at the time (i.e. making ludicrous kiddie movies like Godzilla vs. the Sea Monster and Son of Godzilla), Daimajin could have come across as a more adult-oriented alternative. Special effects in this film (courtesy of Yoshiyuki Kuroda) are surprisingly decent, particularly in terms of the trick photography and visual effects used to create the illusion of a giant (and extremely pissed off) stone monster. Obviously, the Daimajin is actually an actor wearing a suit, but the split-screen techniques in this film do a fine job of allowing the beast to interact with a live-action foreground. Too bad we only get about ten to fifteen minutes of the monster in the final film…

The version of this film that I watched was (gulp!) dubbed into English, though I have to say that the dubbing in this film wasn’t as atrocious as I expected. Certainly, the monotone voice acting alleviates much of the drama going on in the story and too often the actors voicing the villains of the piece simply made belchy, guttural grunts instead of reciting actual dialogue, but I can definitively say that I’ve seen worse dub jobs. Miwa Takada appears as the Hanabasa princess whose desperate appeal finally awakens the Daimajin and I got the feeling that her acting performance might have been pretty decent if it wasn’t for the English dubbing. Yoshihiko Aoyama portrays her brother, the prince of the Hanabasa clan, who exists as the (disappointingly lame) hero of the story. His performance was a little too wide-eyed for my taste – though in fairness, I think some of the problem was due to the weak script material he had to work with. By far, the most fun characters to watch in the film are the villains, including Ryutaro Gomi as the evil Samanosuke – check out the scene where he slices an old woman to death with a sword while contorting his face violently. I also really dug the performance of a larger actor (whose identity I can’t seem to pin down; one of the hazards of these older foreign films is that their onscreen credits are notoriously vague) as one of Samanosuke’s particularly nefarious henchmen.

Despite the fact that Daimajin is strictly mediocre as a film, it does have some noteworthy elements. I really liked some of the location filming, particularly extreme long shots of a large waterfall which the stone statue of the lifeless Daimajin overlooks. These shots, a combination of live action location footage with matte paintings, are stunning to look at. I also appreciated some of the (relatively brief) swordplay and battle sequences which are choreographed effectively and captured nicely on camera by cinematographer Fujio Morita. In the same way I would have liked more monster action, it would have been cool to see more of these skirmishes, but I suspect this production was right up against its budget cap. As much as these sequences are relatively bloodless, I was a bit surprised by an off-color torture sequence and one particularly gruesome scene that occurs near the film’s conclusion. Finally, it’s worth noting that the music score in this film was made by Akira Ifukube, the same man who composed the music for nearly every one of Toho’s Godzilla films and related monster movies. The truly shocking element about Ifukube’s score for Daimajin is that it’s very nearly identical to some of his other, highly recognizable themes. This struck me as being kind of sad – apparently, the man wasn’t given any room to really experiment when making this score – or perhaps, he was simply creatively exhausted. Either way, not a good situation for a guy who crafted some wonderful soundtrack cues over the years – Ifukube, in my mind, is the unsung hero of the entire Godzilla film series.

Just a thought…you might wanna GET THE HELL OUT OF THAT TOWER!

At the end of the day, the best I could say about Daimajin is that it’s a worthwhile but flawed experiment in combining popular Japanese film genres of its day. I could easily say that this film is better made than some of the other monster flicks of the mid 1960s – this production is leaps and bounds more impressive than any of the films in Daiei’s Gamera series for instance. That said, Daimajin isn’t nearly as fun to watch as the best that the kaiju (or Japanese monster film) genre had to offer. I truly believe that in making a darker, more violent picture, Daimajin’s producers could have tapped into a different core audience than was watching any of the other rubber suit creature features of the day, but the end result here is simply tiresome: predictable and unremarkable. Inexplicably, two additional films in the Daimajin series were produced in 1966 and released within months of one another, but as much as they may be worthwhile for fans of Japanese monster flicks who would know what they’re getting into, a viewer isn’t missing a whole lot by skipping them entirely.

Both the DVD box set from ADV films and Blu-ray package from Mill Creek contain all three Daimajin films (the original, as well as The Return of Daimajin and Wrath of Daimajin) in widescreen, with multiple language options. The original Daimajin is also available .

4/10 : Some rough swordplay and battle sequences; a brief torture scene and one gruesome death near the end. A bit of blood and gore.

4/10 : Yes, it’s a Japanese monster movie, but this one is less downright enjoyable than most.

“The god of the mountain is angry. He will not permit this cruelty to go on any longer.” Oh, so you mean the movie’s ending soon?