A DUMB AND INCOHERENT BUT FUN CRASHTRAVAGANZA: RON HOWARD SAYS EAT MY DUST!

Pros: More beer consumption than any film I can think of; lots of fun!

Playing as a sort of slapstick comedy made with vehicles instead of people, 1976’s Eat My Dust! (written and directed by Charles B. Griffith, best known as the writer of the wickedly funny B-movies The Little Shop of Horrors and A Bucket of Blood) exists in the genre of the car chase film as an undemanding entertainment film designed to simply be fun to watch. Much less serious and bizarre than Vanishing Point and less downright outrageous than Death Race 2000, Griffith’s film follows the story of somewhat dorky teenager Hoover Niebold who, in an attempt to impress the girl he has a crush on, steals a stock car in order to take a joyride with said female. Problems arise in the form of Hoover’s father, the local sheriff, who is forced to try and stop the youths before they cause too much property damage or personal injury. 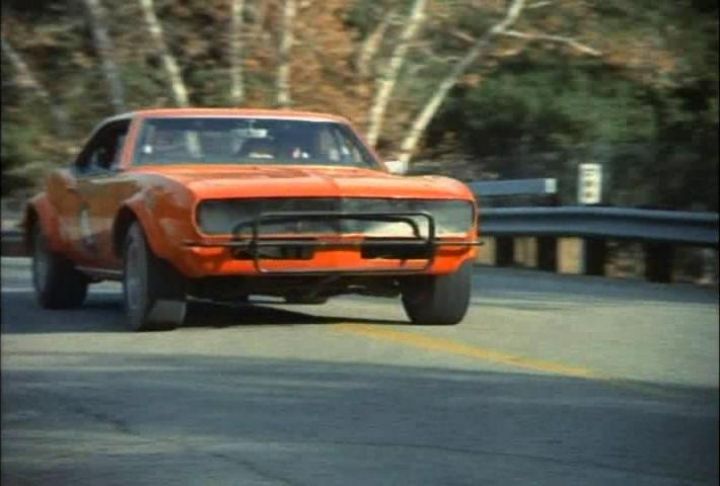 Yeah, so there’s actors in this film. We still know who the real star is…

Like most so-called carsploitation films up to and including recent pictures like the Fast and the Furious franchise, the story here is pretty basic if not non-existent. The whole film serves as one big excuse to show cars barreling along back roads and across countrysides, cracking up and crashing into things at every possible opportunity. In terms of the amount of screen time devoted to the actual car chase, Eat My Dust! has to be placed right alongside films like the original Gone in 60 Seconds and Dirty Mary, Crazy Larry for having the least amount of “downtime.” The chase is on within about fifteen minutes of the start of this film, and throughout the rest of the picture, Hoover’s stolen ‘68 Camaro only slows down for a respite of ten minutes or so when it initially runs out of gas. The remainder of the time, this film strives to operate at a foot-to-the-floorboard pace, throwing in copious amounts of goofy humor, rampant beer consumption, and fantastic, rickety bluegrass music courtesy of Dave Grisman. In short, the film is a blast to watch, even if it is positively moronic and has noticeable bumps in the road. Eat My Dust! sometimes plays like a ballet with cars.

Ron Howard, fresh from his starring role as Richie Cunningham on Happy Days, plays Hoover and apparently, only agreed to do the film after producer Roger Corman offered him the chance to direct his own picture (which turned out to be the following year’s somewhat similar Grand Theft Auto) provided he star in Eat My Dust! Yes, it’s one more Famous Figure of Film Land who got his start at the Roger Corman Film Academy. Here, Howard plays Hoover as a slightly friskier, more mischievous version of Richie: he’s a sort of lovable loser (his method of wooing the ladies: “Just cuz I got a stupid name doesn’t mean I’m not worth going with”) who just happens to hop at the chance to go on that big adventure many of us wish we had. As Darlene, the female along for the ride, we have knockout blonde Christopher Norris, who appeared in numerous television shows from the 1970’s onward. Despite having a boy’s name, Norris is all female sexpot, prancing around in short shorts and occasionally, only a bra. Generally, she comes across as being the bubbly, precocious teenager one would expect to see in a film like this. Since this was a theatrical feature instead of television program, Howard and Norris are allowed to have light make out sessions (some of which occur while Howard is behind the wheel of the stock car), and even engage in some shower fun time when they honker down in an abandoned farmhouse to catch their breath. Don’t worry though: even by the somewhat permissive standards of a 1970’s PG rating, Eat My Dust! is relatively safe viewing for most audiences.

As is the case in many of the hot rod films of the ‘50s and ‘60s, Eat My Dust! is pretty remarkable in its depiction of the youthful main characters as being the only smart folks within a five county radius. Without fail, all the honest-to-goodness adults who attempt to put a stop to Hoover’s joyride wind up crashed in a ditch or worse. The many police officers on the trail of the hot rod (including Hoover’s sheriff father, played by frequent character actor Warren J. Kemmerling) come across as being complete buffoons, and one could almost believe that this film (with its country music soundtrack, rambunctious sense of humor, backwoodsy feel, and lingering views of a souped-up stock car kicking up dust on country roads) may have served as a semi-inspiration for The Dukes of Hazzard. Eat My Dust! may come in a distant second to Gone in 60 Seconds in terms of the sheer number of vehicles destroyed during the film, but the crashes and destruction scenes are clear highpoints of the picture: lovingly captured by Eric Saarinen’s camera, often punctuated by gong strikes, and sometimes shot in slow motion so as to have an almost orgasmic effect. J.G. Ballard would be proud.

Fun as it is though, there’s no way to get around the fact that this film is obnoxious and dumb to the point of being eye-rolling bad. It’s painfully evident that Griffith’s script had maybe a half hour or 45 minutes worth of material in it, which was then padded (and padded …and padded…) out to a 90-minute run time. Sequences that should barely be bumps in the road of the ongoing film are fleshed out to an extent that they border on absurdity. A perfect example of this is a scene where the runaway stock car (and its police pursuers) completely trash a farm. This would have been fine (and maybe even funny) had it been a short set piece that was quickly forgotten but instead, it’s an overdone, extended sequence that sends the picture way off course. In my opinion, there are simply too many throwaway moments like this in the film, most of which depict corny and almost cringe-inducing visual gags. When a patient on a runaway stretcher ejected from a crashed ambulance wakes up and looks around dumbfounded or the script dwells on pointless, unfunny sitcom material dealing with the local citizens being crowded together in the local jail’s holding area, a film that should be an adrenaline-fueled roller coaster ride becomes unnecessarily draggy.

Even if it’s not the most inventive film one is likely to ever see, it’s hard to really get down on a film that not only tries oh so hard to entertain its audience, but also showcases perhaps the worst-sounding marching band in cinema history. Eat My Dust! has a multitude of likable elements, not the least of which is some pretty colorful cinematography which includes some really cool in-car camerawork. Though the acting isn’t all that hot, the cast is appealing (look for film director and Corman regular Paul Bartel, The Partridge Family’s Dave Madden, and a very young Corbin Bernsen in smaller, supporting roles) and the film boasts a rather offbeat ending for a film of this type. Try as I might, the film eventually won me over in spite of its stupidity: all in all, this is ideal drive-in fare, and it’s not at all surprising that it turned a hefty profit for producer Corman on a minimal investment. It’d be a stretch to call it one of the better of the car chase films, a title which I’d be inclined to bestow on a film (like Vanishing Point or even Two-Lane Blacktop which, if anything, is the anti car chase movie) with more substance, but Eat My Dust! is definitely worth a peek for car enthusiasts or those in the market for a mindless but genuinely enjoyable popcorn flick.

Though it’s available as a stand-alone disc, I’d recommend the Ron Howard Action Pack double feature set (part of the Roger Corman’s Cult Classics series from Vivendi Entertainment). This set also includes the feature Grand Theft Auto from 1977, and a nice selection of bonus features. Eat My Dust! is presented in a nice-looking widescreen print and includes interviews with both star Ron Howard and producer Roger Corman, a making-of featurette, and (perhaps most interesting) an interview with longtime movie poster artist . A really cool DVD.

4/10 : Quite a few potty-mouthed characters even if this doesn’t include what I would call “harsh profanity.”

3/10 : Implied sexual encounters and innuendo, including a few make out sessions. Also, a female parades around in her skivvies some of the time. No nudity.

6/10 : Almost a must for car chase film aficionados.

“What’s so funny – it just makes me sick to see grown men laugh at something like that. You know when you laugh, it only encourages them to do more of the same. How in the hell do you expect to control your kids?”