Cons: This DVD is available for purchase

NOTE: The title of this DVD is The World’s Grossest Video. Please don’t read my review if you may be upset by disturbing content and/or descriptions.

In an era where things like the infamous “Two Girls One Cup,” Goatse, and The Pain Olympics become viral sensations online, is there any way a video calling itself The World’s Grossest Video can live up to that titling? This 2002, made-for-video release (put out by the same folks that released the infamous Traces of Death films) runs a scant forty minutes (funny, the Amazon listing says it’s 75 minutes…) and does indeed feature some pretty disgusting footage, but compared to the types of things one can regularly find on the web these days, it’s undeniably tame, lame – and just plain stupid. As is the case with the Traces of Death films, World’s Grossest is a sort of hodgepodge of footage lifted from several sources, and in the end seems less like a consistent program than a mash-up of bad behavior caught on tape. Obviously, the curiosity value of a piece like this is its major selling point, but if you know what you’re getting into, I’m not sure why anyone would really want to give this a looksee.

The main part of the program focuses on home video footage shot by one Tony (“I have a small dick – who knew!”) Virtue, a slightly obese young man living in Trailer Park, USA who has his friends record various “stunts” that usually involve him ingesting various unsavory bodily fluids or substances. The DVD starts off with Virtue (wearing only a jock strap) urinating and vomiting into a container, then mixing the results with canned cat food. To say that the attempts at consuming this concoction are unsuccessful would be putting it mildly – Virtue instead winds up vomiting repeatedly and proceeding to roll around in the mass of excreta. Gross? Yes. Something anyone needs to see? No; if this program had any effect on me, it may have been to put into my mind the idea that people that are this clinical moronic have no place in the breeding population.

Most of Virtue’s acts throughout the DVD are pretty similar to this opener: he drinks his own urine, swallows worms that have been rolling around in a fresh pile of his own feces, offers up his thoughts on the taste of mucus and earwax that he’s been offered by friends, fires a bottle rocket out of his anus, and even pumps air into his rectum in order to “pass gas.” Classy stuff this – I lost count of the amount of times Virtue (often sporting a Faith No More T-shirt and Elmo hat) is seen retching and grimacing as his taste buds are confronted with something none too delectable. (It’s worth noting that the producers of the DVD have blacked out instances of actual defecation – apparently some things are off limits even for a thing like this.) The lack of imagination in the Virtue footage is perhaps the most alarming, jaw-dropping aspect of it: say what you want about things like Jackass, but the crew responsible for that program had some good, legitimately funny segments (like the air horn on the golf course or many “bad grandpa” skits) thrown in with the gross-out “let’s drink horse semen” gags. Virtue on the other hand, appears to be obsessed with human secretions, excretions, and colon functionality to the point where it is simply appalling. It honestly scares me that people like this exist. 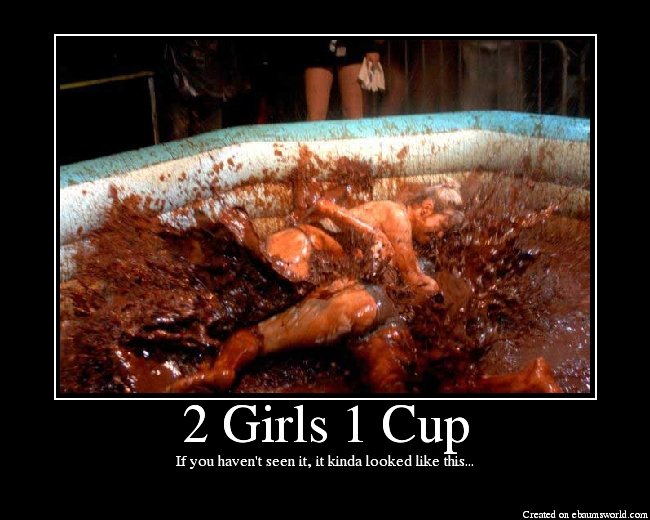 What we’re left with here is a DVD that has zero consistency. The Tony Virtue footage doesn’t flow together at all with the pornographic material (especially since we get extremely crude transitions of swirling CGI effects used as bumpers between segments), and the DVD winds up playing like a random combination of a sicko XXX film and a piece designed specifically for viewing by twelve year olds. Perhaps most damning though is the fact that this program isn’t all that repulsive when compared to what’s out there online these days. It’s worth mentioning at this point that I’ve spent plenty of time tooling around the dark recesses of the internet, places where eye-opening (and potentially soul-shattering) images, videos, and content regularly circulates and often, recycles. The World’s Grossest Video quite frankly doesn’t hold a candle to half of that stuff, or even to the types of things that one can readily find on Youtube. The video is a ripoff and complete waste of time in an era in which it’s excruciatingly easy to find any number of materials that would likely make the average person sick to their stomach. The whole concept of “reaction videos” is indicative of the fact that gross-out footage isn’t just for sickos anymore: normal people watch these sorts of things, then achieve notoriety for being repulsed by them. Having absolutely no redeeming value to it whatsoever, The World’s Grossest Video fails at honestly shocking a viewer that would be willing to have a go at it in the first place, and ultimately winds up as a reprehensible waste. No stars.

Full-Frame DVD from Brain Damage films is trash video quality, with footage obviously “borrowed” from other sources. No extras whatsoever.

0/10 : Full, explicit nudity, but I sincerely hope that no one would be turned on by this program…

Actual Disclaimer: “Dear Video Buyer: we thank you for your interest in our unique new product. Since we have no way to know about your State & local laws, your knowledge is essential for us, to not break those laws. If, during the time this shipment was in transit, the law regarding XXX-rated movies did change, or if you find out that you were misinformed about the legality of these movies, please send them back immediately for a full refund.”
I would suggest any viewer who bought this DVD take advantage of this offer.

Due to the nature of this film, I’m not linking to any trailers or media. Proceed at your own risk…