FULL OF “SENSUALITY AND THE VIGOR OF SADISM,” THE VAMPIRE AND THE BALLERINA IS TRASHTASTIC!

THE VAMPIRE AND THE BALLERINA

Confused and poorly made by any conventional standard, the Italian-made 1960 horror film The Vampire and the Ballerina (also known as L’amante del Vampiro) probably is most interesting today for being one of director Renato Polselli’s earliest features. Polselli would later gain some level of recognition among shock film aficionados for his deliciously perverted 1972 horror/mystery Delirio Caldo, known in its English-language version simply as Delirium, but a viewer would be hard pressed to spot any serious talent behind the camera in the Ballerina film. The script, written by Polselli along with Ernesto Gastaldi and Giuseppe Pellegrini, makes nary a lick of sense at any point and comes across as being a tiresome retread of territory covered many times before in far-superior genre films. In the end, while The Vampire and the Ballerina is a definite curio and a film that’s enjoyable for precisely the wrong reasons, it’s not something that most people would have any interest in seeing.

The film deals with a dance troupe who have inexplicably chosen to relocate to a remote European estate in order to practice their routines. After learning about the area’s vampire myths, two of the blonde dancers named Francesca and Luisa (played respectively by an overly hysterical Tina Gloriani and a sluggish Helene Remy) and their unlikely Lothario of a male companion Luca (played by a goofy Iscaro Ravaioli) stumble upon a supposedly abandoned castle that’s actually the home of a knockout Countess (the busty Maria Luisa Ronaldo, who reminds me a bit of Barbara Steele) and her shady manservant Herman. Wouldn’t you know it that Herman is actually a vampire, attacking local women and draining their blood in order to rejuvenate both himself and the Countess. Though Francesca suspects something is not quite right with the Countess, it’s Luisa who winds up in the worst situation, and the inevitable vampire attack leaves her as a sort of somnambulist who is under the influence of the fiend who drank her blood. Following the attack, Francesca launches a campaign to rally the fellow dancers and the handful of men at the estate against the Countess and her vampire companion, but as she ventures closer to the brink of madness, will anyone believe her? 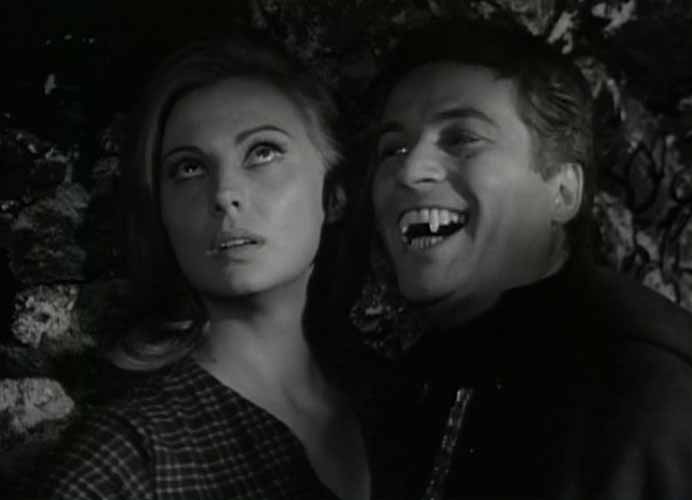 Filmed in gorgeous black and white by cinematographer Angelo Baistrocchi, The Vampire and the Ballerina looks fantastic and boasts wonderful interior sets used to detail the expansive interior of the Countess’ castle. Unfortunately, none of these characters or the ongoing action in the story make any sense from a logical standpoint. It’s almost as if the trio of writers just passed the script back and forth, picking and choosing vampire film conventions to play around with while throwing consistency and character motivation in the loo. Literally, the moods of various people in this film changes from second to second, which is never more evident than in a scene where Francesca first tells her fellow dancers about the suspected vampire who’s attacked Luisa. Within ten seconds, the sense of worry disappears as the dancers forget about the potential danger they’re in and instead begin performing an impromptu “interpretive dance” based on the story of a vampire attacking a young woman. Additionally, the script reaches a level of incoherence usually reserved for a Lucio Fulci film when a young woman is buried alive even though (since there’s a see-through window in the coffin she’s lying in) she peers and screams at the gravediggers as they are throwing dirt down on top of her. If I didn’t know any better, I might almost say that the writers of this film suffered from short-term memory loss since they seem completely incapable of ensuring that any single scene plays through in a consistent manner: there’s always something that comes out of the blue to alleviate any building suspense, drama, or creepiness.

From a purely technical standpoint, Vampire and the Ballerina is a mess. Even in its original, Italian-language print that I saw, the film has been dubbed – like many Italian genre films of the 1960s, it was filmed without sound and had the audio added in post-production. Thus, the problems typically associated with dubbed prints of foreign-produced genre films exist even in the original version of this film – the voice acting not only makes the performances seem laughably bad, but also is so poorly synched up to the picture that it becomes difficult to take any of it seriously. The film reaches a low point when Francesca finds herself alone in a dark and dank crypt. Presumably, this scene would have been one of the obvious “scary movie” sequences, yet curiously there’s no spooky music to set the mood. Worse though is the fact that actress Tina Gloriani is mainly seen sitting motionless against an earthen wall for most of the scene while excruciatingly loud gasps, screams, and wails echo on the soundtrack. The voice is completely out of place for what we’re actually seeing onscreen (Gloriani’s mouth barely moves, let alone contorts in a manner that suggests that she’s screaming), and the result is that this scene, one of the few in the picture that really had the potential to be somewhat eerie, is more ludicrous than scary.

…And then there was the day Regis skipped the makeup trailer…

And then there’s actor Walter Brandi, who appears in the film playing the role of Herman the vampire. Though Herman typically looks like a normal, middle-aged guy, when he hasn’t fed on human blood for awhile, he transforms into a being that resembles an extremely haggard Regis Philbin, with unconvincing plastic fangs, gangly, swollen hands, and a mop of shaggy hair. In contrast to the quiet and restrained Herman, the vampire can do little except go into lengthy monologues about how he’s the “master of the world” and finish every stretch of dialogue by cackling maniacally while whipping his head to and fro.

Arguably one of the strangest elements of this film (which is saying something) is the music score by Aldo Piga which frequently seems completely inappropriate. The film features several completely absurd, misplaced dance routines which typically play out to some jaw-dropping, inappropriate music (subtle, classical ballet melodies one second, blaring burlesque tunes the next). Furthermore, this may be the only film in history in which a possibly suspenseful chase scene is accompanied by honest-to-goodness stripper music playing on the soundtrack. All in all, the unexpected soundtrack cues, moody photography, not-so-subtle eroticism, and surreal touches provided by the disjointed storyline nearly allow this film to play as a demented arthouse production.

To most viewers, this film would play as the low-budget Eurotrash that it quite obviously is. As much as viewers could say what they want about it though, they never could call this film dull. There’s plenty of insanity going on here, and it compares favorably to films from this period made by the more “acclaimed” director Jess Franco. The Vampire and the Ballerina wouldn’t be something that many or indeed most people could appreciate, but if you get a kick out of films that are “so bad they’re good,” this not-altogether-coherent film that’s nonetheless strangely enjoyable might be worth tracking down.

I saw this On Demand in a nice-looking, full-screen, Italian-language print with English subtitles. While it hasn’t been released on video, it is available streaming from amazon.

4/10 : Pretty minimal throughout much of the film, with only a few bloodless vampire attacks. A goopy ending gives it some punch however.

8/10 : It’s strange and stupid, the kind of thing that’s tailor made for cult film fanatics.

Contradictory dialogue in action: “There, you are a monster again. Just a hideous monster. And I still need you. You are hideous…”