“WE’RE GOING TO NEED A MUCH, MUCH BIGGER…DECOY…” MEGALODON: THE MONSTER SHARK LIVES

“In April 2013, Discovery Channel crews were granted exclusive access to document the investigation of a downed fishing vessel off the coast of South Africa. The footage captured during this investigation is now being shown on television for the first time…”

So begins the 2013 made-for-cable special Megalodon: The Monster Shark Lives. This program, originally run during 2013’s Shark Week, chronicles the process by which marine biologist Collin Drake, with the help of fellow scientist Madelyn Joubert and shark expert Mike Bhana, came to believe that a giant marine predator was stalking the world’s oceans. After the mysterious sinking of a fishing boat, an examination of the wreck reveals the vessel was torn to shreds, with video evidence recovered in the debris seeming to suggest that something hit the boat from underneath. Subsequently, a local eyewitness reveals a startling photograph that seems to show a giant shark attacking a stricken whale, prompting Drake and his colleagues to being a full on examination of giant sharks. During this time they uncover various other stories and images that seem to collaborate the idea that the Megalodon shark, a 100 foot long relative of the Great White that was thought to go extinct some 10,000 years ago or more, is still alive and well. With this knowledge in hand, Drake, Joubert, and Bhana take the investigation to its logical(?) conclusion by attempting to hunt down and tag a Megalodon in the wild. Dealing with such a massive creature however may be more dangerous than any of the scientists had imagined….

If Megalodon: The Monster Shark Lives sounds like a bad Syfy Channel movie, that’s because it may as well be. Though this “Monster Shark Meets The Blair Witch Project” was originally broadcast on a channel known for its (supposed) educational programming, Megalodon, much like a 2012 Animal Planet special that had viewers wondering if mermaids were real, is a completely fictional program. Sure, it looks like any number of legitimate documentary specials, going so far as to have extensive talking head interviews and “cliffhanger” hooks that turn up just before any commercial break, but I’d shudder to think that much of anyone would be convinced by the not-so-hot acting and bargain-basement CGI animation that’s used to depict the monster sharks. Any of the “evidence” brought forth by this program looks incredibly hokey – I’ve never been a fan of CGI in the first place, but much of the footage presented here looks to be (at best) late 1990s-era animation. A photoshopped image of a giant pectoral fin planted onto an image that supposedly shows a whale being attacked or a “vintage photograph” of German U-boats patrolling the African coast that reveals a large shark cruising in the background are bad enough, but when a straight-up fabricated image of a beached whale that’s been bitten in half appears in the program, I suspect most viewers would be ready to say that enough is enough. The actual Megalodon here looks only slightly more convincing than the rubbery mechanical effects that featured in the enjoyably terrible Jaws 3-D that was made in 1983. 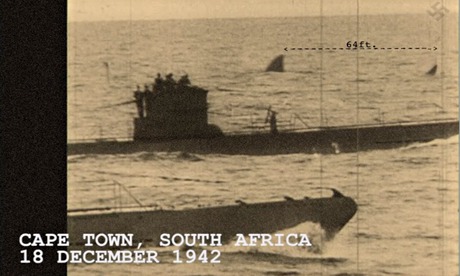 “WHOA LOOK AT THA…wah…wait a second…”

The fact that this program was a hoax led to an incredible backlash against the Discovery Channel: after all, aren’t the things on this channel supposed to be “real?” The ironic thing about this discussion is that it only takes a brief perusal of the types of programming seen on this channel to realize that viewers are constantly being manipulated and or straight lied to. This just in: there is nothing real about most so-called “reality TV;” the filming and editing process alone ensures manipulation. Thus Amish Mafia, Deadliest Catch, and (dozens of) other reality shows on the channel all contain material that’s at the very least, not entirely accurate. The only honest difference then between any of these programs and the Megalodon special is that people may have actually believed that Megalodon was in fact accurate, which ultimately says more about the viewers themselves than about anything Discovery Channel was doing. In an era where shows about monsters or the unknown capture the viewers imagination no matter how ridiculous they really are from any logical perspective, the viewing public seems all to willing to buy what they’re seeing on TV as being as least partially credible. This explains the popularity of thought-provoking but generally absurd (and scientifically suspect) programs like Ancient Aliens, flagrantly dishonest and ludicrous things like Mountain Monsters, and also hints at why some people legitimately believed that mermaids exist following Animal Planet’s Mermaids: The Body Found. Seems you can fool some of the people all the time.

Animal Planet’s Mermaid mockumentary is the obvious blueprint that inspired Megalodon, and an unsuspecting viewer in all likelihood could have taken it as being authentic. The show is presented in exactly the same manner of most of the legitimate documentaries that are out there, with a narrator explaining the situations as we see Drake and his crew examining evidence and forming opinions. Much of the program plays almost in the manner of a mystery and is rather talky – it’s only late in the game where Megalodon starts to pretty obviously rip a page out of the Jaws playbook and feature the inevitable hunting sequence finale. Similar to numerous faux-documentaries over the years (the ghoulishly convincing 1980 shocker Cannibal Holocaust in my estimation being the best of the best), Megalodon makes great use of the fact that viewers of these types of programs equate shaky and shoddy camerawork with verisimilitude. Thus, the moments in which something exciting is happening onscreen are typically precisely the moment when the camera starts to fail, providing only fleeting glimpses of the action. The “big finale” moment is, as expected, nearly all smoke and mirrors.

Looks almost as bad as this….

As much as I could trash some of the CGI here and, frankly, got tired of seeing the same (admittedly) animated footage of a giant shark attacking a whale, some of the computer effects are pretty decent. During the final quarter of the program where a tremendous bait slick and a full-size mock whale are utilized in order to lure in the beast, aerial photography enhanced with convincing graphics complete the illusion that this is actually happening. The film also contains some decent nature footage (including footage of white sharks swimming around a shark cage and performing aerial feeding maneuvers) and it was fascinating to see real images of so-called “Lazarus species” (animals previously thought to be extinct) like the giant squid, narwhal, megamouth shark and coelacanth that were presented in order to show that it’s possible a Megalodon could go unnoticed in the world’s ocean. It’s typically when computers are used to render living animals that problems arise in the show: I was none too impressed with underwater shots of (normal-sized) great whites circling a shark cage. Additionally, the acting among the humans in the piece feels stiff and forced, especially true for Darron Meyer who appears as Drake. Eventually, it simply becomes difficult to believe the events in this story are occurring spontaneously, which may ultimately be why the film doesn’t quite achieve a genuinely authentic feel.

Say what you want about it, but Megalodon: The Monster Shark Lives (directed by Douglas Glover from a script by John McLaughlin) undoubtedly achieved exactly what it set out to do. It certainly got people talking about the possibility that this creature did exist, and probably got people to tune into the Discovery Channel in droves. It’s worth noting at this point that, not only does the human race have almost no idea of what exactly exists in the world’s oceans, but that there have been worldwide reports of giant sharks (including the 30-foot “submarine” reported in South Africa that’s mentioned in this program). In many ways, to learn that large sharks prowl the world’s oceans wouldn’t be all that surprising, so I’d be inclined to say that this program isn’t as far-fetched as some people might believe.

I think the main problem people had with the show was that it was presented as factual from the beginning, thus the show convinced gullible viewers that it indeed was authentic. One has to (gasp!) READ in order to know for certain this program was “dramatized,” and even then, these declarations are brief and ambiguous. Knowing then, that people were furious when they learned the program was fake says to me that this program was entirely successful. Had this been a made-for-video movie not at all connected to an educational TV channel, it likely would have just been taken as the worthwhile time-waster that it is and forgotten. It’s fortunate then that Discovery did take a chance with a program of this nature since it did get people talking about and interested in this subject. In the end, though it’s incurred plenty of wrath since it was first broadcast, if a viewer enters this program knowing full well the entire thing is a hoax and just goes along for the ride, it would be an entertaining way to spend two hours or so. After all, this can’t be any worse than half the stuff that plays on Syfy….

I don’t believe this has been released on DVD; it is available streaming and does play fairly regular-like on Animal Planet and/or Discovery.

4/10 : Some gore and violence related to shark attacks; really, the original Jaws is ten times worse than this.

8/10 : Maligned by many, appreciated by few; it may take a special type to appreciate this.