BROTHER AGAINST BROTHER ON THE RACE TRACK : INDIANAPOLIS SPEEDWAY 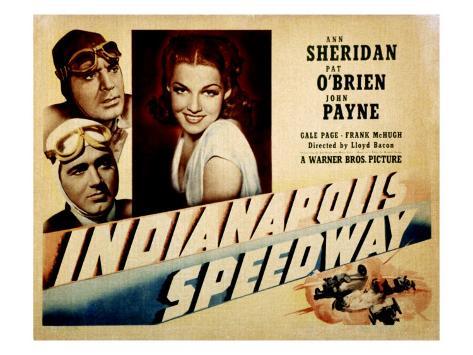 Cons: Just about everything

Featuring a climax that takes place during the famed Indianapolis 500 mile auto race that occurs each Memorial Day weekend, 1939’s Indianapolis Speedway plays like a scene-for-scene remake of 1932’s The Crowd Roars directed by Howard Hawks. Considering that Hawks’s film, which featured James Cagney and Joan Blondell in leading roles, was none-too-great to begin with, one has to wonder just what exactly Warner Brothers was thinking in green-lighting a remake only seven years later, especially given that the pool of talent assembled for Indianapolis Speedway pales in comparison to those who worked on the original film. I’d have to suspect that one of the main reasons why Speedway got the green flag was the fact that the same racing sequences seen in the original film could be inserted as-is into the remake, thus saving quite a bit of money and effort. These were, after all, the “action sequences” of the story, and most of the remaining footage could be thrown together quickly, cheaply, and without too much effort. Ultimately, the lack of imagination is what sinks the remake: Indianapolis Speedway is a complete waste of time, a piece cranked out rapidly in order to make a few bucks at the box office.

It’s pretty shocking that the script for Indianapolis Speedway is credited to Sid Herzig and Wally Kline, based on a story by Howard Hawks. To say that this film is an original work stretches the notion of authorship beyond the breaking point: essentially, it’s a shot-by-shot recreation of The Crowd Roars, featuring the same set of characters and an identical scenario. The story starts off by introducing Joe Greer, a champion race car driver, visiting his younger brother Eddie for the first time in several years. Viewing his kid brother as the “brains” of the family, Joe’s been using his race winnings to send Eddie money to pay for his college tuition. Turns out though that Eddie’s been spending the money on other things, namely the construction of his own race car, and he’s been having moderate success on the local circuit. Initially reluctant to see his brother enter the dangerous world of auto racing, Joe agrees to tutor him in the “rules of the road” after he witnesses Eddie’s determination to succeed. The brothers’s racing career hits a major hurdle however when Eddie falls for a sharp-tongued young woman named Frankie who Joe believes would provide a bad influence in the young and naïve man’s life. This leads to inevitable hostilities between the two brothers that only intensify when they’re racing together, and following a tragic accident that occurs as a result of aggressive driving, it seems that Joe’s racing career is all but over. Do you suppose that the rivalry between family members can settle down long enough for the duo to claim victory in the world’s biggest automotive race?

To be frank, director Lloyd Bacon’s Indianapolis Speedway is just a clunker of a movie, even (perhaps especially) when compared to the strictly mediocre film that served as its blueprint. By any stretch, The Crowd Roars wasn’t a great flick, but to its credit, it did have a legitimate talent in Howard Hawks calling the shots from behind the camera. The entire feel of the film seemed to have been flavored by the types of crime thrillers that Cagney is best known for, and indeed one of the most interesting aspects of this talky and mostly tedious film was that one could see the actor in a role outside of his typical “tough guy” characterization. Bacon’s Indianapolis Speedway plays in a much different manner, operating during its opening third as light slapstick, emphasizing goofy humor and witty dialogue spat out very quickly by its cast of actors. This comedic tone is simply forgotten at some point in the film in favor of a more dramatic storyline, but I wasn’t willing to buy into this abrupt and rather jarring transition. The “tear-jerker” moments that exist later in the film are more ludicrous than heart-wrenching, and the blame for this situation falls on a cast that simply can’t hold their own with the given material.

Pat O’Brien as Joe Greer comes across as a jerk from the opening moments of the film. Mind you, Cagney’s Greer wasn’t much better, but at least Cagney could act. O’Brien seems incapable of presenting any genuine emotions when he’s called on to do it: it’s pretty amusing to watch scenes in which he gets that far-away look in his eyes when he attempts to reconcile his feelings of worthlessness and failure. A scene in which he starts out whining to his on-again-off-again girlfriend only to break down weeping is nearly too much to bear, perhaps one of most jaw-dropping examples of “overdoing it” I’ve seen in quite a long time. John Payne portrays Eddie as a sort of go-lucky everyman, but why is it that he (easily the more appealing of the brothers) permanently plays second banana to the womanizing, boozing, and rather despicable Joe? The most satisfying thing in the film is watching Joe hit rock bottom and mope about it – this guy doesn’t in any way, shape, or form deserve any better. That we have to later witness his character’s miraculous redemption actually ruins the film since it details precisely what I didn’t want to happen under any circumstance.

Given that Joe is a scumbag, his would-be girlfriend Lee (played by Gale Page) is perfectly forgettable, and Eddie clearly isn’t the main focus of the story, it’s really no surprise that Ann Sheridan all but steals this movie playing Eddie’s spunky ladyfriend Frankie. Sheridan (at one point strutting around in GASP! a revealing outfit that exposes her bare midriff) has all the best lines (listen for the scene in which she – rightfully- admonishes Lee for hanging around with Joe), and gives this film the spark it oh-so-desperately needs. Problem is that the writers and director don’t seem to latch onto the fact that Sheridan is easily the best character here – right when it seems like we’re finally going to have a character who can potentially make this film watchable, Frankie is all but eliminated from the narrative, playing only a very minor role throughout the last half of the film. If I didn’t know any better, I’d almost declare that those responsible for making this picture purposely sabotaged the production by focusing the narrative on characters a viewer doesn’t give a damn about while downplaying and/or eliminating the film’s best aspects.

As mentioned earlier, all the racing scenes in this film were lifted straight out of The Crowd Roars, and while they played OK in the film they were designed for, these sequences look like the “stock footage” that they are in Indianapolis Speedway. Cut-ins featuring O’Brien and Payne sitting in cockpit mock-ups with dirt being thrown at them while rear-projection race cars speed around in the background aren’t at all convincing, and in the end, the very race scenes that should be the highpoint of this film wind up being bland, positively tiresome and lackadaisical. Even if a film like the much-maligned Days of Thunder careened off course, becoming a full-on romantic drama at some point, the thrilling race sequences ensured that a viewer didn’t completely lose faith in the production. Yes, the film was super cheesy (not to mention dumb), but it delivered what a viewer expected he would get out of it. Indianapolis Speedway, on the other hand, not only focuses too heavily on domestic issues, but lacks any tension or suspense as it builds up to a sputtering, unexciting climax. Poorly acted and lazily directed, this unoriginal and corny film stands as a horrific remake of a film that in no way shape or form ever needed to be remade. Skip it: the real deal Indy 500 has truckloads more action and drama.

It’s available on a DVD-R paired with the highway scare film The Bottle and the Throttle (which sounds like it would be more fun that the feature). I caught this on TCM, and personally, wouldn’t recommend shelling out any cash for it.

3/10 : Realistic portrayal of the dangers of racing, including a fatal accident. Minimal blood; some disturbing themes.

1/10 : Some threatening language; nothing major

2/10 : Ann Sheridan oozes sex appeal, but alas, we get nothing more than a few glimpses of bare skin