“I DON’T HAVE A VENDETTA, SHE JUST PISSES ME OFF…” FMW – TORN TO SHREDS

Torn to Shreds, the sixth volume in TokyoPop Home Video’s series of Frontier Martial-Arts Wrestling compilations, takes a different approach than that of the previous entries, standing as an entry that could either be a highlight of the series or a definitive low point. The FMW promotion was started in Japan in 1989 and quickly became infamous for its habit of sanctioning violent stipulation matches involving barbed wire, various weapons, and even explosives. This style of “garbage wrestling” brought the promotion instant notoriety, and was mimicked by several other organizations, perhaps most notably by the renegade American promotion Extreme Championship Wrestling (ECW) which popped up in the mid-to-late 1990s. Though FMW was mostly unknown domestically and extremely obscure for years, TokyoPop’s video series (released in the early 2000s) allowed American viewers to experience what separated this promotion from any of the well-known American federations, but even if the levels of violence seen in FMW matches was unheard of in the 1990s, the actual wrestling on display frequently seemed sloppy and tiresome. Generally speaking, though these FMW DVDs were frequently eye-opening, they wouldn’t appeal to those interested strictly in scientific, technical wrestling.

Torn to Shreds focuses exclusively on the FMW women’s division, featuring seven match illustrating that Japanese female wrestlers did in fact wrestle and weren’t simply on hand to provide a T&A show for the viewer. Having said that though, it’s safe to say that most of these women wrestlers are not what I would call skilled technicians. A few of the big name performers in FMW clearly knew their way around the “squared circle,” but the women featured on the undercard look buffoonish as they perform repetitive, underwhelming moves and craft matches that barely sustain a viewer’s interest. Six matches here are from a December 22, 1995 card at the Korakuen Hall in Tokyo, with the final one from a September 1996 show at the same venue. Combined with the atrocious commentating (provided by John Watanabe and Eric Geller, who still pull out the worst, most puerile “jokes” imaginable while making up blatantly inaccurate stories about the wrestlers featured in the program), the lackluster wrestling action ensures that overall, this program is perfectly forgettable, with only one match that could definitively be labeled as being outstanding. Kudo in what appears to be a barbed wire, baking soda bloodbath match…

Here’s the match rundown and descriptions:

1. Chikayo Nagashima and Chihiro Nakano vs. Aki Kanbayashi and Sonoko Kato – Featuring a plethora of wrestlers either performing in their first FMW match or in fact making their pro wrestling debut, this match turns out to be the amateurish rumble that would be expected. There’s brawling right out of the gate after some extremely awkward pre-match interviews in which most of the competitors looked scared to death. Subsequent repetitious moves (which suggest that each lady here only learned a handful of moves in anticipation of this contest) don’t make it all that exciting. Despite the presence of some rough action late in the going, with women jumping in and leaving the ring continuously, I’d call the bout insignificant. One and a half stars.

2. “Bomber” Hikaru vs. Miwa Sato – As I’ve pointed out time and again, Sato is arguably the least talented feature performer in FMW. This woman found herself involved in serious feuds (mainly with the popular duo of Combat Toyoda and Megumi Kudo), but simply couldn’t handle herself in the ring. Her matches were garbage, and here she flounders through another one with the technically proficient Hikaru. Sato uses a towel to whip her opponent, and (somewhat amusingly) winds up biting Hikaru’s arms and even fingers – that’s the extent of her offense through a large portion of the match. A moment where Hikaru bench-presses Sato and unceremoniously dumps her over the top ropes pretty much says it all, perhaps an indication of Hikaru’s frustration level in performing with an opponent who simply couldn’t hang with her. After a dumb buildup towards the finale (in which, again, Sato utilizes no technical maneuvers whatsoever), the match graciously ends. One and a half stars mainly due to Hikaru’s performance.

“One dislocated spine coming right up!”

3. Kaori Nakayama & Yukari Ishikawa vs. Hiroumi Sugo & Kanako Motoya – Quick tags and beatdowns all around in this energetic, fast-paced contest featuring some of the more technically sound women wrestlers who weren’t quite up to main event level at this point in their careers. I’m not sure I’d buy the announcers’ declaration that this is a demonstration of the “grace” of women’s wrestling, but there’s no doubt these performers are a step up from what was seen previously on this DVD. As was the case with the previous match, the buildup towards the finale is somewhat weak, butI did like the close-range moonsault performed by Nakayama after she’s launched in the air by her teammate. Nothing special I suppose, but it’s decent. Two and a half stars.

4. “Bad Nurse” Nakamura vs. Chigusa Nagayo – Barely a minute long, this “barbed wire bat match” isn’t so much a contest as a plot device used to detail the ongoing feud between the FMW wrestlers and “invaders” from other promotions. Mainly, the bout consists of a tug of war between the two combatants over the use of the bat, and once this struggle is concluded, the match is over within a matter of seconds – without the use of the weapon. What’s the point? No stars.

Awkward photo op of the day!

5. Combat Toyoda vs. Kaoru – A sort of grudge match taking place after Kaoru was refused entry into the “Women’s Wrestling School, Class of 1986 Reunion Match” as featured on the previous FMW volume. These two women mainly exchange submission holds throughout the early parts of the match, a style of fighting that’s appreciated in Japan but (especially for those used to American wrestling) seems rather lazy and boring. Lowpoint of the contest involves the women just sitting in a scissor lock for minutes at a time – is this supposed to be a wrestling match or a subliminal attempt at making lesbian erotica? In any case, it’s a grueling contest once it does get going, with the more powerful Toyoda just beating down her smaller, more technically-based opponent. Both these women take some pretty serious abuse to their spine – check out the sheer number of back drops that take place. It’s slower-paced for sure, but this turns out to be a fairly entertaining match if one can sit tight for a while. Three and a half stars.

6. Megumi Kudo vs. Shark Tsuchiya – Here we have a main event, barbed wire death match between two bona fide arch-rivals in which the ring ropes have been replaced with razor wire. The extremely popular Kudo is sort of the glamour queen of FMW, while Shark is a dirty player if there ever was one, using weapons and outside interference to claim victory. Considering Kudo’s reputation, some might be shocked to see her in as brutal and bloody a match as this one: she bleeds profusely from the head after being ripped up by the barbed wire. By the end of the match, her once white costume is stained with blood and listening to her scream as she’s brutalized by Shark is a bit unsettling. Shark, as would be expected, uses a barbed wire-covered baseball bat and even a sickle to assault Kudo, at one point slamming her repeatedly onto a table which refuses to break. Just when all seems lost for Kudo, the cheers of the fans start to give her some life…This match is brutal, and a fine demonstration of what truly separates FMW from most of the “extreme” wrestling one might see in the United States. It’s also worth noting that, unlike some FMW matches where the violence occurred seemingly “just because,” this one features great psychology, buildup and tension. Four stars. 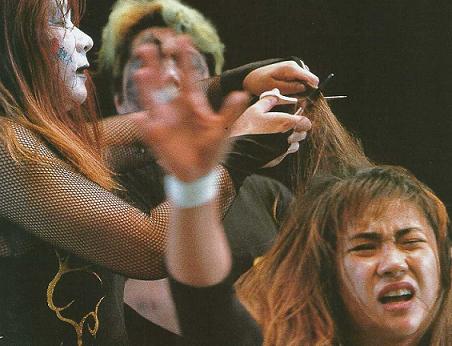 Aftermath of a Hair vs. Hair match

7. Shark Tsuchiya and Miss Mongol vs. Megumi Kudo and Kaori Nakayama – Occurring some nine months after the previous contest, this technical bout pits the hard-nosed team of Shark and the powerful Miss Mongol against Kudo and her would-be successor Nakayama. Typically for this style of tag team match, it’s Nakayama who takes a beating early at the hands of her opponents (check out the spine-compressing monkey flip where Shark launches Nakayama right onto her tailbone – OUCH!), with Kudo desperately trying to get the “hot tag” to get in the ring and clean house. I’m not sure anyone would buy the fact that the petite Kudo would really have a chance against the big and burly Shark and Mongol, but that’s the magic of pro wrestling, isn’t it? In any case, this one features some nifty Lucha Libre style high flying moves, including several leaps out of the ring, and some definitive power displays from both Shark and Mongol. I’d call it a decent but somewhat unexceptional match. Three stars. 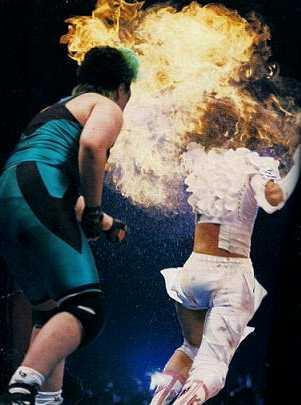 And this is why fans love to hate the Shark…

Perhaps one of the only honest-to-goodness positive things about Torn to Shreds is that this volume represents the final time that TokyoPop would utilize the abysmal “humorous” format in their FMW programs. Starting with the next volume, the FMW series would feature a “straight-up,” factual presentation, thus making it possible (for the first time) to actually take these FMW DVDs seriously.

The main problem I faced when viewing Torn to Shreds (aside from having to sit through the endless potty jokes, goofy facial expressions on the part of the announcers, and trash level video production during the intro sequences) was the simple fact that these matches weren’t generally hard-hitting enough for my taste. Having been brought up in the style of rough and tumble “stunt wrestling” that ECW was doing in the mid-1990s, watching these women attempt to pull off moves without really committing to the performance was simply unconvincing and frequently cheesy. Though the final three matches here were decent, only the Kudo vs. Shark match was anything truly worth getting excited about and the program highlighted plenty of downright sloppy wrestling. In the end then, this DVD seems light in action overall and is undeniably one of the weakest entries in the FMW video series. Fans of Japanese wrestling might get a kick out of it on some level, but I’d recommend starting an examination of FMW elsewhere.

Decent quality full-frame disc from Tokyo Pop features the option to watch the matches either with or without the English-language commentary. Honestly, it may be better to listen to the Japanese announcing regardless of one’s ability to understand Japanese. There’s also wrestler bios and a (supremely goofy and VERY Japanese) video portrait of wrestler Megumi Kudo that features a sense of self-importance missing from most American wrestling video promos as well as gratuitous bikini and crotch shots. Huzzah! Also, a bonus match:
Megumi Kudo, Combat Toyoda, and Kaori Nakayama vs. Shark Tsuchiya, “Bad Nurse” Nakamura, and Miwa Sato – A 22-minute match cut down to 2.5 minutes that resembles a car crash compilation since most of what we see is women colliding with one another. Impossible to gauge the flow of the match; this “bonus” is just a waste. No stars.

6/10 : Generally, these matches are fairly restrained, however the barbed wire death match here is extremely bloody and graphic. As per the case with all these FMW DVDs, this one might not be appropriate for sensitive viewers.

3/10 : Lousy and inappropriate humor galore, with a few minor cuss words thrown in for good measure.

0/10 : Witness the invention of the “crooked clam hold…” as women in tight spandex rub against one another for an hour and a half…

7/10 : Not only is it Japanese wrestling that sometimes resorts to the ol’ ultraviolence, this volume also features women doing all of said wrestling!

Highlight of the commentary: “…she looks like a beached sea tortoise in danger of dehydration…”