THE MOVIE SUCKS MORE THAN THE CREATURES IN IT: BLOOD LAKE: ATTACK OF THE KILLER LAMPREYS

Pros: Yeah, about that…

From the same “studio” (term used lightly) that produced the infamous made-for-cable movie Sharknado comes their latest abomination Blood Lake: Attack of the Killer Lampreys. Aired as part of the Animal Planet channel’s 2014 “Monster Week,” Blood Lake deals with a Michigan animal control officer named Michael Parker who, after relocating to a small, lakeside town, is faced with an infestation of lampreys, a species of jawless, eel-like fish. Some varieties of lamprey feed by attaching themselves to prey with their sucker-like mouths and proceeding to suck the blood of the host animal. Obviously, these are the types of lampreys featured in the film because they’re, well, the type of creature b-monster movies are made for.

Anyways, Parker faces a challenge since, due to the large volume of lampreys that have appeared in the area, their natural food supply has been obliterated, causing the creatures to seek out and prey upon humans. Honestly, that’s about all one needs to know about Blood Lake since it’s so utterly, completely predictable that it nearly defies belief, liberally reinterpreting the basic scenario of Jaws (right down to the dog attack scene and the mayor who’s worried about losing out on tourism income) and operating in the same, tiresome manner as countless other monster movies. I get that Blood Lake was purposely made in a cheesy fashion to seem jokey and downright bad, but I’m confused as to why anyone would really want to waste two hours on something as positively unrewarding as this.

Surrounded by blood-suckers. In shower. With a plugged-in hair curler. Brilliant!

As easy as it is to blame director James Cullen Bressack for this woefully uninspired hunkajunk, I’d be more inclined to place the blame squarely on the shoulders of writers Anna Rasmussen and Delondra Williams, a duo specializing in lowbrow made-for-TV movies with titles likes Sharknado, Social Nightmare, and (ready for this?) Ragin’ Cajun Redneck Gators to their “credit.” Typically, I try to avoid things like this: while the made-for-TV movie at one point had some level of prestige attached to it (in the old days, many of these productions had some sort of message to deliver, and quality pieces like Steven Spielberg’s suspenseful Duel and the honestly scary The Day After from 1983 attest to the fact that TV movies used to be taken seriously), these pictures anymore seem to be an excuse to make unsophisticated dreck that would barely satisfy even the least demanding viewer. Blood Lake certainly falls into that category, being an unimaginative, extremely melodramatic movie that’s never the least bit scary as it defies logic to the point that it apparently takes place entirely in a fantasy land.

Characters here behave in a manner that’s so inconsistent that it becomes nearly impossible to feel any kind of connection to them, let alone like them. Sure, Michael Parker comes across as a “good guy,” but the man’s stereotypical family (made up of a wife who doesn’t at all seem to trust the man she married, along with an angsty teenaged daughter and a nerdy young son) just grates on a viewer’s nerves. Rasmussen and Williams inject nothing new into these characters: of course the introverted young son (played by the cute but utterly ineffectual Yar Koosha) tries throughout the film to find a friend and prove that someone likes him. Obviously, the daughter (played by Ciara Hanna, who comes across as laughably bad in her performance) finds a boyfriend within a day of arriving in this small town, and has numerous moments where she lashes out at her parents who “just don’t understand” her. At a certain point I just lost count of the amount of times the daughter (“I’m the queen of selfies!”) in particular inspired me to roll my eyes: wait for the out-of-nowhere temper tantrums, tearful moments, and obligatory “you’re the worst dad in the whole wide world” routine. Ugh! Incidentally, the other characters in the film (particularly the scumbag mayor who’s ready to throw a verbal assault on Michael at any given moment and a moronic animal control officer Michael works with) don’t fare any better. Believe me when I say that you’ll be waiting desperately for a few of these characters to kick the bucket already. 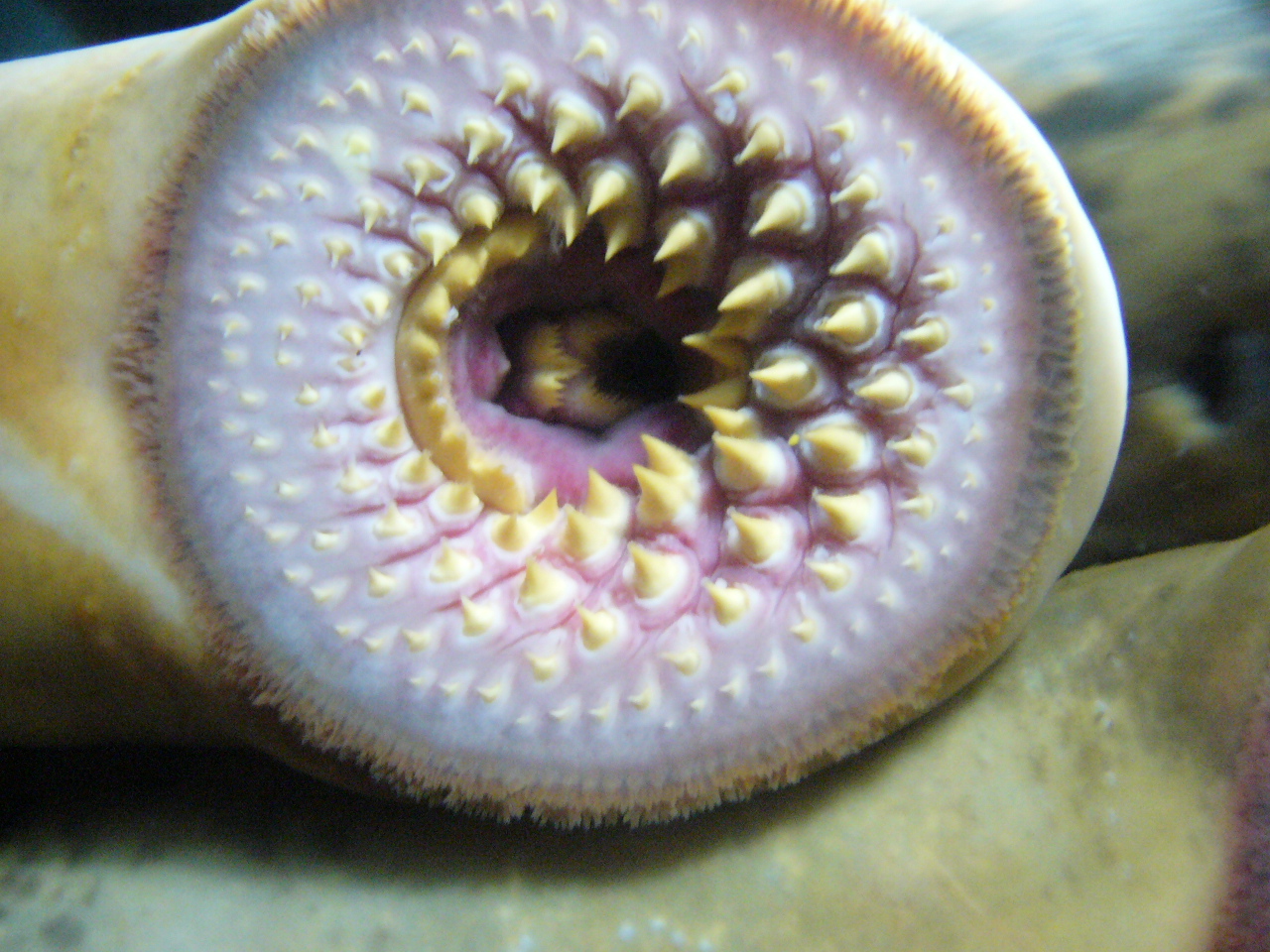 Now THIS – an actual lamprey mouth – is the stuff of nightmares…

Blood Lake offers up no surprises in the way it plays out – one will be able to see any twists in this storyline coming from the next county over – and has some of the worst dialogue I’ve experienced in a film in quite a while. Witness the “cool story, Dad” moment, and “heartwarming” family time scenes between Michael’s wife and her children – do you suppose that this somewhat estranged family will rekindle their affection for one another by the end of the film? The monster action itself not only doesn’t satisfy on any level, but frequently operates in a manner that’s completely tasteless. Frankly, when a lamprey sucks the eyeball out of a bum fishing in a polluted creek or (even more reprehensibly) wiggles its way into a character’s rectum after attacking him from within a toilet bowl, I was a little shocked that a piece like this played on a channel that (at some level) provides “educational” programming. Certainly Blood Lake (like Sharknado before it) got people talking and laughing uncomfortably, but this ludicrous, somewhat mean-spirited, and puerile film really is undeserving of any notoriety or attention.

We’ve got a cast here who really should have known better than to get involved in a picture like this: Jason Brooks at least seems earnest as Michael, but Shannen Doherty (as his wife), Christopher Lloyd (the town mayor), and Rachel True (as a fellow animal control officer) seem embarrassed at times, and rightfully so given the positively awful material they have to work with. Doherty gets to do the whole “concerned mom” routine, but her emotions don’t ring true since she seems either to be completely hysterical or inappropriately subdued. I haven’t seen Rachel True, who played small but memorable roles in films like 1997’s Nowhere and the stoner comedy Half-Baked, in a while, but she is positively wasted, having little to do other than provide a potential victim for the rampaging creatures. It’s just plain sad to see Lloyd (sounding marble-mouthed as he delivers frequent angry diatribes) reduced to playing in this film, and the writers seem to be almost be insulting the man due to the ridiculous behavior of his character. I realize everyone has to pay the mortgage, but still…

As is typically the case in this genre of film, Blood Lake relies on an overload of computer-generated special effects which are rather gory at times, but never entirely convincing. The cast members frequently are reduced to doing the “lamprey shuffle” as they stomp away at murderous creatures that aren’t actually there, and the attack scenes that are present in the film are undeniably goofy. Did I mention before that this film doesn’t make any kind of sense? The lampreys here not only slither on the ground like snakes, but also shoot up and out of sewage pipes, eject from human mouths and eye sockets, and even burst Alien-like from human torsos. And how could I forget to mention the “ingenious” ways in which the humans deal with the creatures, including the use of a weed whacker.

With the production of Snakes on a Plane, it seemed like the monster movie moved into an era where stories had to be more and more audacious, but judging from the collective results of these films, I’d be more inclined to stick to the classics. Blood Lake really has nothing on Attack of the Giant Leeches, Stanley, Squirm, or even Slugs, and again proves that it’s nearly impossible for modern filmmakers to replicate the feel of old fashioned and/or classic b-movie monster pictures. (Supposedly) Improved special effects, a nudge-nudge-wink-wink approach that lets the audience know the cast and crew aren’t taking things all that seriously, and purposely absurd script simply can’t make up for the fact that most “bad movies” of yesteryear were attempts by incompetent film makers to make good movies. These films are enjoyable precisely because of the fact that those responsible for them took what they were doing very seriously. By purposely making a bad film then, modern producers are losing the key element that made many a bad movie worthwhile in the first place. In the end, Blood Lake simply tries to hard to be funny and cool: because of that very attempt it seems to lack heart and conviction. I’ll admit that I chuckled a few times while watching this film, mostly because I simply couldn’t believe how ludicrous this thing was getting, but I’d in no way, shape, or form call this bottom-of-the-barrel, cheap and lazily-produced effort a worthwhile viewing experience.

This was a made-for-cable movie and one can only hope this doesn’t wind up on disc at all, but I have a feeling that it’s only a matter of time. If you must, catch it on a repeat airing.

6/10 : A few scenes of surprisingly gory violence. Probably not a film intended for sensitive viewers (or those with good taste for that matter).

1/10 : One utterance of the word “damn” and some aggressive speeches. Nothing much.

2/10 : A couple of the female characters prowl around in bikinis and occasionally get a bit frisky. No nudity or overt sexuality though.

7/10 : This is plenty whacked-out – undoubtedly someone out there will eat it up.

“Nice pet Michael – it looks like an anus with teeth.”