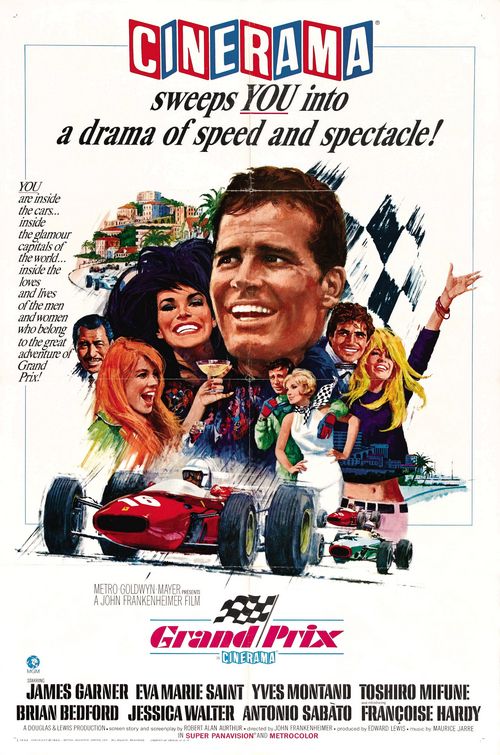 Focusing on a sport that still may be the most expensive and most outright dangerous in the world, director John Frankenheimer’s 1966 film Grand Prix, which follows the Formula One world championship as it (literally) circles around Europe, is regarded by many as the finest auto racing movie ever made. I can see why this would be the case, since the racing sequences themselves are incredibly exhilarating and technically marvelous considering the time in which the film was made. Unfortunately, this nearly three hours long film plays too often in the manner of a soap opera, dealing mainly with the romantic exploits of a group of generally unlikable characters. Throughout much of the picture, I was unsure who exactly I was even supposed to be rooting for or viewing as the main character since the narrative jumps around quite a lot and rarely seems to settle in long enough to provide a satisfying depiction of any individual figure. Ultimately then, Grand Prix is a film of contrasts: one that will undoubtedly captivate the viewer for the half of its running time that chronicles the racing itself but will put him to sleep during the remaining duration that follows off-track activity.

During the biggest Formula One race of the year taking place in Monaco, teammates Pete Aron (played by rather surly James Garner) and Scott Stoddard (a lackadaisical performance from Brian Bedford) are having a fierce battle on-track when a mechanical failure causes Aron’s transmission to seize. Stoddard, with nowhere to go, plows into the rear of Aron’s car and is seriously injured in the ensuing crash. Furious at the mishap which he believes is Aron’s fault, the team owner fires Aron, leading him to seek a racing drive elsewhere. An opportunity arises in the form of an up-and-coming team owned by Japanese businessman Izo Yamura (the great Toshiro Mifune, whose voice is dubbed by the same guy who did the voice of Dr. Hu in King Kong Escapes – WTF??!?), and Aron jumps at the chance to get back in a race car. As the rivalry between Stoddard and Aron heats up, one is also brewing at the Ferrari team between veteran French driver Jean-Pierre Sarti (French actor Yves Montand) and his cocky and young Italian teammate Nino Barlini (a lively Antonio Sabato). Meanwhile, soap opera shenanigans taking place off-track pop up when Aron tries to shack up with Stoddard’s flirty, suddenly-estranged wife (played by none other than Arrested Development’s Jessica Walter), while Sarti puts the moves on a plucky, older American woman (Eva Marie Saint) doing a story on the racing scene and Barlini charms any female in sight (including French singer/actress Françoise Hardy). As the championship battle comes down to the wire at the season’s final race in Italy, these interpersonal relationships begin to either spiral out of control or get real, and not everyone is going to walk away from this racing season unscathed…

On the high banks at Monza

As one might expect considering that this is the work of a director coming off a number of tightly-constructed thrillers including The Manchurian Candidate, Seven Days in May, and Seconds, Grand Prix is a technical marvel even if it in ways comes across as a bit of a mess. On one hand, the film definitely does a fine job of capturing the glitz and glamor of Formula One racing and the high society folks that inevitably are drawn to the sport. The picture also is phenomenal from a cinematic standpoint, with split-screen work and rapid-fire editing (designed by legendary graphic artist Saul Bass) that does a remarkable job of relating the tense atmosphere surrounding the races themselves. This film was photographed in 70mm and it shows, playing as a sort of test run at the types of techniques that would be used in the landmark music/concert film Woodstock. The editing and split-screen work flawlessly convey the idea of concurrent events taking place and give the viewer a seemingly authentic portrait of a “live” event as it happens. Additionally, Grand Prix boasts amazingly colorful photography by Lionel Lindon which not only captures breathtaking international locations, but also makes it seem like a viewer is right in the driver’s seat much of the time. I can easily see how this film influenced television coverage of auto racing since it includes aerial shots taken from helicopter which provides a “bigger picture” view of what’s happening in the race as well as in-car views that show how intense the competition is on the ground. Obviously, this film was made well-before in-car-cameras became widely used, so all this technology had to be developed exclusively for this film. The results of all this work are stunning to look at.

Problems begin to creep into the picture anytime cars aren’t barreling around on various racing circuits though: the script by Robert Alan Aurthur gets increasingly lame and tiresome as it goes along. Any sort of relationship issue one can imagine might turn up in the film, actually does – I was waiting for one of the women to declare that she’s pregnant at any moment. It’s rather disheartening that Aurthur appears to use various cliché story devices simply to elicit a gut response in a viewer rather than develop anything any aspect of these characters, and the barrage of sappy story material left me more nauseated by than legitimately concerned about them. I also thought the ending of the film was downright ineffective: I can understand that the film didn’t want to end on an entirely sour note in its depiction of Formula One, but the cop-out final scene with Garner walking the grid at Monza lessened the impact of the hard-hitting moment that featured at the climax of the picture. Given that one of the minor themes of the film deals with the racing audience’s need for accidents, blood, and potentially death, it’s strange that Frankenheimer and Aurthur didn’t go for the jugular here when they very easily could have. The conclusion of the film, in my mind then, simply drops the ball. As much as I could say that the acting performances in this film are par for the course in a film of this nature from this time period, I also could point out that the actors don’t entirely impress. Generally, it seems as though most of the attention here is on Yves Montand as the honorable, veteran French competitor who’s beginning to see that his days racing are numbered. Considering that the Montand story comes across as schmaltzy despite the actor turning in arguably the best performance in the picture, it seems a ridiculous notion to focus a large amount screentime on an even less interesting storyline involving James Garner and his relationship with the wife of his main rival. It’s also pretty astonishing that a universally appealing and likable actor as Garner comes across like a prick in the film: I just couldn’t in any way shape or form like this guy no matter how much charm Garner as an actor has. To be frank, Jessica Walter seems like a total bimbo as she flip-flops from one guy to another while “living it up” in the racing scene, and Eva Marie Saint simply gets too hysterical down the stretch after doing a nice job in her early scenes. Finally, I’d be remiss if I didn’t point out the hilariously awful scene in which Sabato and Hardy engage in a war of words late in the going – listening to these two attempt the English language will just make your jaw hit the floor.

Formula 1 Racing in the 1960s was DANGEROUS!

While the story leaves quite a bit to be desired, it should go without saying that Grand Prix would be an absolute must for fans of Formula racing since it shows the cars, tracks, and drivers that actually were competing in the sport in the mid 1960s. Being a fan of F-1 since I was a lad, the history on display was amazing to see, and it was also fascinating to me that this film seemed to capture the exact moment when the “old time” racing drivers were starting to find themselves challenged by “hotshot” younger talent – a situation that is even more prevalent today. I also loved how the climactic race took place (and was filmed) at the classic combined Monza circuit replete with high-speed, high-banked turns – this made the whole finale all the more exciting for me. Finally, it was pretty remarkable to see how much safety regulations have changed since the mid 1960s. I was shocked to see these cars speeding around the (full and lengthy) Spa-Francorchamps course in Belgium considering that this course uses public roads, runs within feet of actual residences, and has no guardrails of any sort over much of its length. Though the film doesn’t shy away from depicting how dangerous the sport is/was, it may actually downplay the outright brutality of Formula One racing in this era: in the era from 1966-1975, fourteen drivers – including Jochen Rindt, Jo Schlesser, Jo Siffert, and Lorenzo Bandini who all appeared in the film – lost their lives due to injuries sustained in crashes.

Despite its (many) shortcomings, it’s safe to say that Grand Prix is decidedly more interesting to watch than big-budget, star-studded melodramatic trash of the Airport variety – as much as I did get frustrated with all of Grand Prix’s stale off-track debacles, it never reaches the ultra-cheesy lows of a piece like the aforementioned 1970 disaster opus. A viewer can endlessly wish Frankenheimer’s amazingly ambitious film would have been more consistent, had better story material, and gotten better mileage out of a talented ensemble cast, but I’d have no problem saying that the images and sound alone make it worth watching. The roar of automobile engines have rarely been captured this well (the film won well-deserved Oscars for Best Sound, Sound Effects, and Editing), and Maurice Jarre’s music perfectly captures the ups and downs of competitive racing, with the opening overture in particular superbly mimicking the sound of race cars whizzing by. This film seems to be exactly what modern television producers are trying to achieve in their coverage of racing events, and imperfect though it is, Grand Prix is, quite simply, spectacular viewing.

A nice home video package – a gorgeous widescreen print of the film is supplemented with a half-hour “making-of,” a featurette about Saul Bass’s editing schemes and the sound design, a short tour of the famous Brands Hatch raceway, and a vintage behind-the-scenes program. Most interesting (to me anyway) was a short featurette dealing with F-1 racing in the 1960s that included interviews with various drivers and some cool archival footage.

3/10 : A few gnarly racing accidents showing the expected blood and carnage. If anything though, this film actually tones down the brutality of classic Formula One racing.

2/10 : Some adult-oriented discussions, a few uses of the word “damn;” pretty sanitary overall.

3/10 : These drivers get lucky on and off the track, though this film is mostly all saucy talk.

4/10 : Race fans will dig the hell out of the action sequences – and be bored beyond belief in between them

“I used to think nothing could be better than motorbike racing. Three times I am a World Champion on my motorbike. I am happy. Then I go into one of these, these cars: you sit in a box, a coffin, gasoline all around you. It is like being inside a bomb! Crazy, but of course the cars are faster, and that is the most important thing. ”