A “SHOCKUMENTARY” OF THE LOWEST ORDER: TRACES OF DEATH 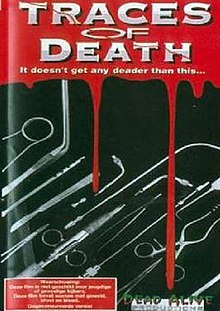 Pros: Serves its purpose, I suppose

Cons: Awful production values; grainy footage that people interested in this film would have seen other places; narration; lacks any taste or class

NOTE: Traces of Death is an extreme documentary that contains footage of actual human and animal death. This film is not for everyone (or maybe even anyone), and any discussion of it would inevitably contain discussions that many people would find objectionable.

PLEASE DON’T READ THIS REVIEW IF THIS SUBJECT MATTER MAY UPSET YOU!

The genre of the “mondo” (so named for the series of films resulting from the original 1962 Mondo Cane, an extreme cultural documentary that included nudity and scenes of actual violence – usually against animals) or shock documentary really entered the next stage of its development in the 1970s, when a series of Italian films (1975’s Savage Man, Savage Beast for instance) and the notorious original 1978 Faces of Death aimed at presenting actual human death and destruction. While these films were very extreme and graphic, much of the footage they presented was of questionable authenticity. Arthur Davis’s 1975 mondo Brutes and Savages admitted to simulating some of the footage it contained in a pre-credits message, and one only has to look at the very cinematic presentation of footage (the electric chair execution in Faces of Death for example) to see that whole sequences in some of these films were faked. By the 1990s, groups of basement ”film makers” (who would perhaps best be described as tape editors) had begun assembling their own “shockumentaries” using footage pulled from newsreels and previous films. One such no-budget hackjob production was Traces of Death, released in 1993 by then-fledging Brain Damage Films. While this “studio” has gone on to make all sorts of extremely low budget, bottom-shelf horror flicks, what really put them on the map were their shock films. While Traces certainly has a lot of authentic footage, its cheapjack production makes it questionable viewing even for the select few who would watch such a film in the first place.

“NO War Victims! NO 30’s Gangster Clips! NO African Animal Huntings! Absolutely NO Staged Scenes!” So screams the packaging for this film, and indeed Traces does avoid many of the cliches that had taken up the runtimes of similar (superior) productions like Death Scenes (a sort of survey of vintage crime dossiers) and Africa Addio (a travel documentary filmed by the makers of Mondo Cane that featured a veritable ton of animal slaughter as well as horrific wartime images from various African revolutions). One gets a sense that the makers of Traces convinced themselves they were making something quite different from the large number of shockumentaries out there, and indeed they were: they’ve created one of the most iffy productions of the lot, a film full of cheesy, primitive digital effects (this was made in the 1990s after all), ridiculous narration that’s the very definition of bad taste, and a large quantity of recycled footage that anyone familiar with this genre of documentaries would have probably seen dozens of times. There’s no rhyme or reason to the footage either: it’s organized very poorly, as if the whole thing was made on the fly as footage was acquired. These elements put together ensure that the whole of Traces of Death is, as the British censorship board declared, devoid of any “journalistic, educational or other justifying context for the images shown.” In short, it’s a parade of gore and atrocity with no purpose of any sort.

Without going into gruesome details, rest assured that a viewer of this piece witnesses a large amount of gory crime scene photos as well as seeing car accident victims, rodeo and bull fighting mishaps, air show disasters, stunts gone wrong, soccer riots, auto racing crackups, rally cars piling into crowds of spectators and more. The main part of the first Traces of Death however seems to revolve around a sort of grisly anatomy lesson provided by an endless stream of surgery and autopsy footage. Most of this material is presented without any sort of explanation, leaving a viewer to try and determine what exactly he’s watching (one example of unexplained brain surgery seems to be extremely crude and rough, this despite the fact that the person being operated on is very obviously alive). Inevitably, “one of the great questions of mankind” is answered when footage of a male-to-female sex change operation is offered up, and it may be one of the most alarming moments in the production. And, how could we forget the footage (all five seconds of it) of Nazi war criminal Ilsa Koch’s skin and face collection that the producers of the film “are very proud to present.”

Personally, having seen a majority of the shock, mondo, and death videos that have been commercially released over the years, I believe the thing that separates one from the other is footage that was filmed live. Any of these “films” can procure an endless supply of medical footage, but the point of interest from one film to the next is newsreel-type footage of actual events. On that front, Traces of Death’s most jarring moments include the well-documented suicide by .357 of then-Pennsylvania State Treasurer R. Budd Dwyer (which remains one of the most horrendous things most people would ever see – and which was broadcast on the news unedited when it took place in 1987), a woman being shot dead on live television by her jilted husband as she talks to a news crew, and footage lifted from Savage Man, Savage Beast that shows an unfortunate African tourist being mauled by lions after he makes an ill-advised exit from the safety of his vehicle. This last footage has been the source of much speculation with regard to its authenticity, and I’m still unconvinced that it hasn’t been staged to some extent. As is typically the case in shock films, the worst moments in Traces are reserved for animals – in this case, there’s a difficult-to-watch (even by the standards of a death tape) scene in which a living pig is burned horrifically with an open-flame torch. What the purpose of this experiment was is never explained, but hearing the prone animal squeal in terror – and seeing its skin literally crack and peel away from its body – is almost too much for even a viewer hardened on this type of footage to take.

Production values throughout Traces of Death are virtually non-existent: the footage here (sometimes obviously taken from other sources – with Japanese subtitles, genital blurring, station IDs being covered up awkwardly, etc.) is universally grainy and washed out to the point where it’s often difficult to even distinguish what one is looking at. In a way, this adds to the shock value since the grime-coated footage feels dirty and makes one want to take a shower right away after looking at it. Additionally, the often smart-ass comments coming from writer/narrator Damon Fox make the whole thing seem very amateurish and frankly, disgusting (probably the main reason why this video has no legitimate educational or other value whatsoever). I guess we can be thankful that the producers of this video opted not to assault the audience with obnoxious death metal on the soundtrack (this would be reserved for Traces of Death volumes two through five); here, we have a doomy, almost John Carpenter-like synthesizer score accompanying the imagery.

All in all, I suppose Traces of Death accomplishes what it sets out to do. It would be plenty shocking for many viewers, and obviously, only a select group of viewers would even want to make an attempt on something like this. At the same time though, it remains a technically terrible piece of exploitation of the lowest order; literally put together by a guy with two VCR’s and a large amount of gruesome video footage. For me, the trashiness of the production combined with the large amount of footage that I’ve seen elsewhere makes this volume especially questionable; I don’t think it’s particularly worthwhile even for this generally reprehensible genre. Obviously, most people would be well-served by avoiding this (or any other death video for that matter) altogether, but even for the curious, there are better, more well-rounded and worthwhile examinations of this type of subject matter elsewhere.

Full-frame disc from Brain Damage films (still with very iffy picture and sound quality) offers up two minutes of bonus footage (a woman unexpectedly being hit by train; the infamous footage of a mentally-disturbed elderly man committing suicide with a shotgun following a police chase; a few other ghoulish “delights”), and about three minutes of an interview with the film’s producer discussing the origins of the project and the “underground horror scene.” Yeah…

“Do fear the reaper’s call, for he comes for thee…”

Due to the nature of this film, I’m not linking to any trailer or clip. Proceed at your own risk…